Fall Out, Fall In

More war shorts, as Donald’s Army adventures continue today in Fall Out, Fall In. The way that Disney tracked Donald’s progression through his days in the Armed Forces is really great. We’ve seen him go from the draft board to basic training and now into the field. 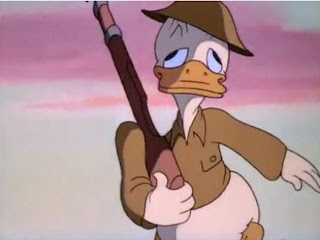 This short again does not use the quality that I feel makes Donald his best, which is the use of his temper. A different approach comes in this film, where instead the audience is made to feel sorry for Donald. It’s something that we’ve seen more and more in recent Donald shorts, and sometimes it works, sometimes it doesn’t. 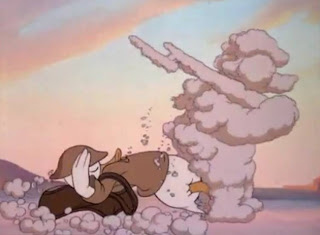 Here, it’s not too bad. The short starts with Donald marching through the countryside as an upbeat soldier, happy to be part of the team. Of course, as things progress, his enthusiasm wanes and he endures more and more pain. As a viewer, the sympathy for Donald grows and grows through the short. That’s very effectively done through the gags. 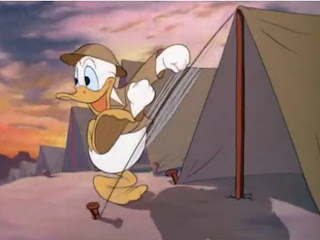 Gag work here is a bit more involved than other shorts in 1943 that we have seen. Compared to something like Private Pluto, which used the same gag over and over again, Fall Out, Fall In features some new gags as we go along. The running gag of Donald marking the miles off on the solider in front of him is great, but there’s many more.

The passing of the seasons as they march is quite good, seeing Donald go from freezing to death and covered in snow, then on to spring and summer, burning in the blazing sun. When they finally stop marching, it just gets worse for him, though. 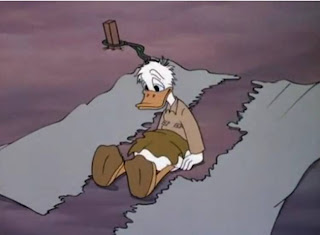 There’s some great stuff when Donald’s trying to pitch his tent as well. He’s starving, but the commanding officer keeps having him put up his tent, stand at attention or do all sorts of things that keep him from getting the tent set up. Then, when he does, it just doesn’t stay up properly. The poor guy doesn’t even get to sleep, because the other soldiers snore in syncopated time! 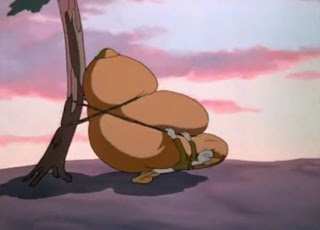 Fall Out, Fall In isn’t perfect, that’s sure. The pacing feels a bit off to me, as the marching and other things seem to stretch a little too long, and the gags are nowhere near as rapid fire as we’ve seen in other Donald or Disney shorts. But it’s an improvement over Private Pluto and some of the other war shorts.