After seeing the Donald Duck shorts so far in 1947, I think it’s safe to say that Disney was losing confidence in the duck as their leading character. Remember, Mickey was no longer en vogue, and outside of Pluto, there were not a lot of shorts coming out each year. What’s interesting is the extent to which Disney has gone to work around Donald while still putting his face on the short. 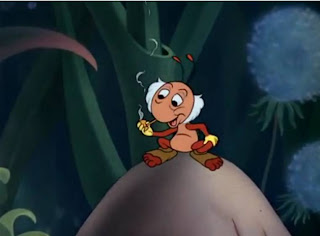 We saw Daisy as the narrator, Goofy sharing the billing and now we get an entirely new character, the Bootle Beetle. Very strange, no doubt, but it gives us a really cool new character to enjoy. The Bootle Beetle is presented as the main protagonist in this short, battling against Donald for its survival. Donald is the villain of the piece in this telling. 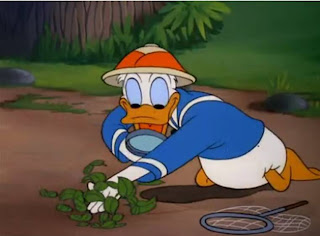 The Bootle Beetle is introduced by an omniscient narrator who tells us that the beetle is one of the rarest bugs around, and highly valued by collectors. What follows is an older beetle cautioning a younger one from venturing forward into the world at large and then relating the story of his encounter with a “giant monster” which was also Donald Duck. 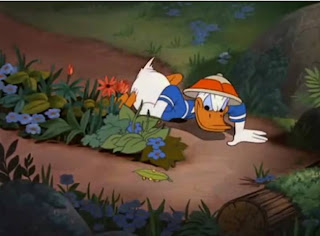 While the story and the gags are somewhat entertaining, there isn’t a whole lot here to get excited about. The beetle’s escapes from Donald’s clutches are not thrilling or funny, just sort of routine. The interactions are notable mainly because of the beetle’s narration not recognizing Donald but continually referring to him as a monster. While that’s somewhat amusing, it’s not enough to hold up an entire short. 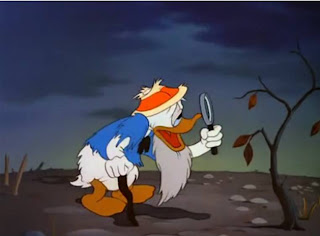 What’s more intriguing to me is the movement we are seeing here that minimizes Donald in his own cartoons. The shorts of this era lack the anger we saw earlier from Donald and seem to rely on gimmicks and changes to the storytelling rather than solid gags. It’s clear the attention of the staff has turned over to the features program, and it’s possible walt has also turned his attention away at this point. That leaves poor Donald fighting it out with a bug in an obscure short.

All images copyright Disney.  All rights reserved.
Posted by Ryan at 4:12 PM