Clown of the Jungle

Walt’s South American trip was about more than just producing a couple of package features like Saludos Amigos or The Three Caballeros. The original goal was to establish a program of short subjects that would provide Disney with new characters. Some of these, like Pedro the airplane or the Flying Gauchito, never really took off. One, though, did manage to break through a little bit into the Disney canon. 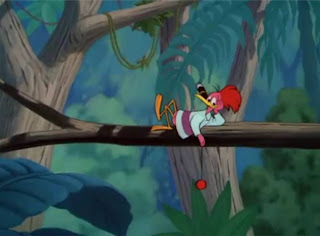 The Aracuan is the crazy red headed bird that showed up first in The Three Caballeros. His crazy patter and wild nature was endearing there, so he was brought back for this short, Clown of the Jungle. The Aracuan appears on screen to break up the otherwise monotonous story of wild birds in South America. He shows up with a cigar, bounds around the screen and squeaks and coos to the viewer. 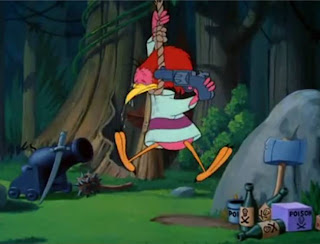 In many ways, his unbounded energy and chaotic attitude are the perfect foil for Donald Duck. Introducing Donald into the mix as a bird photographer gets things going, since he is looking for “serious” subjects while the Aracuan is there to only to interrupt and generally play. He sees Donald as an opportunity to enjoy himself and doesn’t take the duck too seriously. 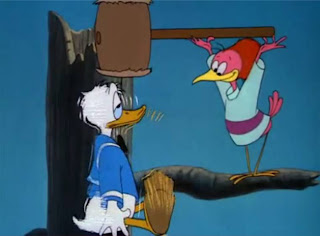 Donald, though, is drop dead serious about his need to take great pictures, and the Aracuan isn’t having it. The antics are hysterical, because the Aracuan is unbound by the typical constraints that other Disney characters operate under. He can pop in and out of the screen with no logical progression, can defy the laws of physics and move any which way to make a gag work. 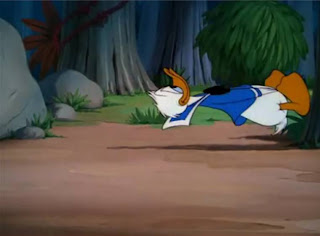 That makes him a wonderful character. All the other Disney characters are fairly conventional, and the ways the Aracuan acts drives Donald so insane that he ends up adopting these unconventional traits himself. It’s an amazing thing to behold, really. I know the Aracuan shows up again in other shorts and it’s no surprise why. He’s so much fun that I can just imagine animators eager to play with their medium using this fabulous little bird.