Rolling on into 1947, we come to a very strange entry in the Disney shorts known as Donald’s Dilemma. I call it strange because although it is a Donald Duck cartoon and features an opening that brands it as such, Donald is not the main attraction. Instead, Daisy takes center stage for the first time in a Disney cartoon. 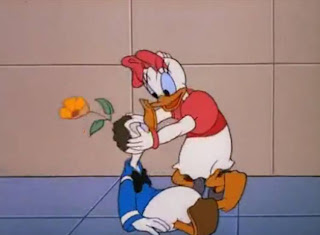 I’ll have to say the results are mixed. Although Daisy is established at this point in the canon of Disney as Donald’s girlfriend, she has not had much to do aside from spurn Donald. The few times we have seen Daisy have not hinted at much of a personality. This time she does have one, but I’m not sure it’s the kind of personality we want her to have. 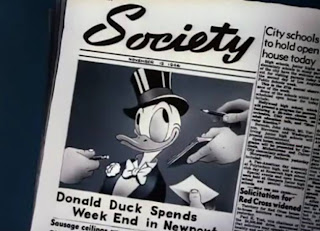 The trouble that faces Daisy comes from a transformation in Donald’s personality. He switches from the quacking, ill-tempered duck we know to a suave singer who lights up the stage. Daisy turns from a confident girlfriend that we’ve seen in other shorts to a woman spurned who will stop at nothing to retain her man. 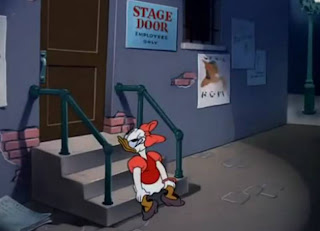 It’s a strange transformation, because it shows Daisy as a woman who needs a man to make herself happy. There are some very strange scenes in the montage of Daisy dealing with the fact that the “new” Donald doesn’t recognize or care for her. There’s even a shot of Daisy with a gun to her head preparing to shoot herself! This is not what we expect from a cartoon. 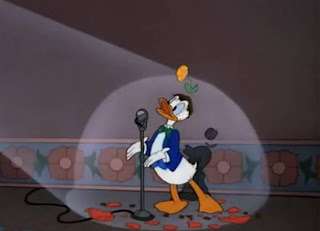 Layer on top of that that the song that vaults Donald to prominence is his rendition of “When You Wish Upon A Star.” It’s very confusing to see a song made famous by a Disney animated film being reused in a Disney animated short that is supposed to reflect the world at large. Very strange. We have officially entered the era of Disney self-reference, which combines with Daisy’s personality change to make this one of Disney’s strangest shorts.

All pictures copyright Disney.  All rights reserved.
Posted by Ryan at 3:02 PM