Crazy From the Heat

There have been some bizarre shorts to come out of the Disney studio in the post war era. We saw Donald’s Dilemma yesterday that featured Daisy as the focus, and the meta commentary that occurred. In Crazy From the Heat, things get even weirder as we see Goofy and Donald re-team for the first time in years. 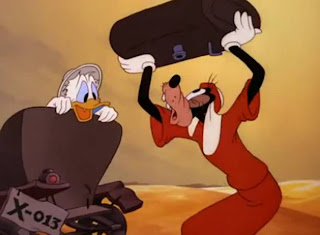 As they are crossing the desert, Donald and Goofy have their car break down, which leads to a long trek across the sand to find water and shelter. With the heat beating down upon them, there’s ample opportunity for comedy. It’s a formula that cartoons have used for many years. So we can expect some mirages and fun ideas when the two turn on each other, right?

Strangely enough, we get the first but not the second. That makes all the difference in this short as we veer from the predictable and funny to the unpredictable and insane. Let me explain as best I can, because the results are truly bizarre. We see Goofy and Donald squabbling over water a little bit, but the true fun starts when Goofy sees a mirage of a soda fountain. 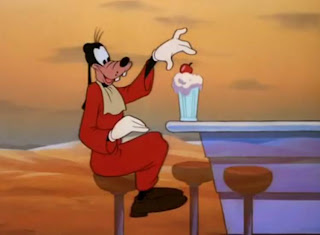 The Goof wanders over to take part in the delicious ice cream treats that the fake soda fountain has to offer, only to be denied each time he tries to take a sip. If it sounds weird, it is. The even stranger thing is that when Goofy tries to sip, the mirage disappears, but he stays suspended in air! It gets worse when he is threatened with washing dishes because he can’t pay, and the dishes appear to be real. 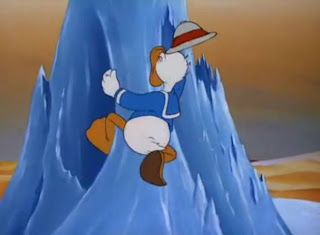 The line between reality and mirage is very confusing in this one, and it only gets worse. Donald sees his own mirage of an iceberg, but then gets sucked into Goofy’s delusion. Goofy drops the dishes and the mirage figure who is threatening him ends up chopping off the top of Donald’s hat and giving him a black eye. It doesn’t make sense! 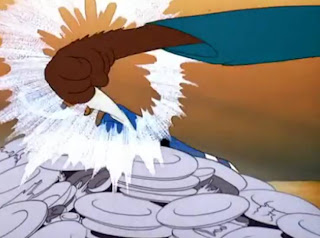 Watching this short is like pulling on a loose thread of a sweater. You keep pulling, trying to figure out where the end is, but it keeps unraveling. While there were parts of this that were funny, it was so confusing overall that it was difficult to understand what was going on. What was real? What was mirage? Figuring that out in Crazy From the Heat was difficult at best, and just plain weird as well.