There is a mold to Disney shorts that usually follows the traits of the characters. The Mickey shorts feature a good natured Mickey having a good time with some occasional complications. The Goofy shorts have him attempting some sport or endeavor with a narrator. Donald’s short inevitably have him trying to do something too grand or too wrong and getting frustrated. 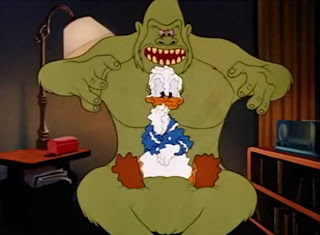 So when something breaks that mold, it’s noteworthy. Duck Pimples is one that shatters the mold, and does it very, very well. The short manages to take Donald and stick him in a very unfamiliar situation, as well as taking him out of reality and placing him in a sort of dream world. The comedy flies fast and furious, and if you blink, you’ll miss some small detail or bit of fun that the animators placed in this short. 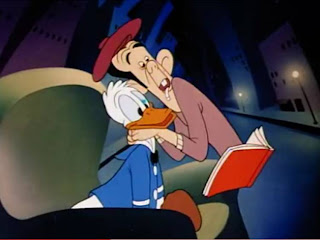 Donald is sitting by the radio one night when he decides to turn off the light to relax. Unfortunately for him, the radio dramas that night are decidedly not relaxed. Instead of calm music or romance, all Donald hears is mystery and murder. He even envisions a giant ape from one of the stories right behind him. It gets even worse when a raincoat clad man shows up at the door and leaves a pile of mystery and crime books on Donald’s floor. 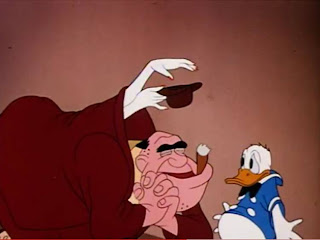 The silliness escalates with the characters from the books climbing out of the books and carrying on with Donald. They go back and forth with accusing Donald of committing crimes, stealing from them and even kidnapping a woman who is standing in the corner. If it sounds silly, that’s because it is. It feels so much more like a Looney Tunes short than a Disney one. 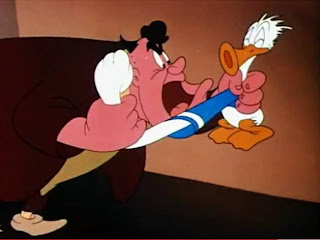 The stereotypes are in full effect here, but to great comedic value. You have the Irish cop who badgers Donald to death, eats “donuts” and turns out to be corrupt in the end. There’s the sleek, sophisticated woman who’s probably hiding something herself, and who ends up playing the cop for a fool. Of course, there’s also the bookish, nerdy author who shows up to resolve everything. 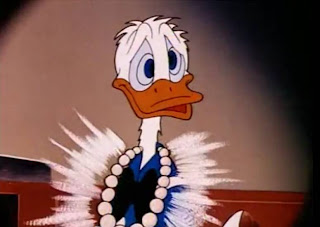 The short really plays as a tribute to film noir, one of my favorite genres. During the 1940s, film noir was in its heyday, with fabulous films being released by major studios with some of the biggest stars. This short puts a zany, Disney twist on it, and comes away with something special. It allows us to see Donald on a roller coaster ride that is truly enjoyable to watch.