Of all the Goofy sports cartoons, Hockey Homicide may be the most famous, or infamous depending on how you look at it. It combines all the great assets of a Goofy short – narration, madcap action, multiple Goofys and a frantic, crazed ending. It makes for a short that never lets up, delivering laughs from start to finish. 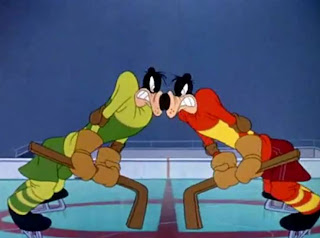 Goofy had already been through plenty of sports at this point, and ice hockey was a natural next step. I wonder after seeing this if the caricature that many people have of hockey as a fight with a little bit of play attached to it comes from this short. After all, the first part of the hockey game shows the star players from each team fighting and being sent to the penalty box, a spot they will occupy for the rest of the short. 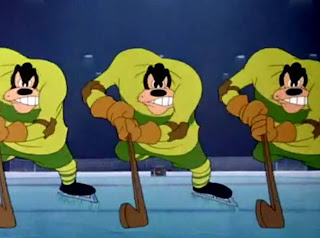 Usually, I am a fan of storytelling and plot, and the role that those things have in pushing forward a short. In this case, though, it’s all about the manic energy of the back and forth on the ice, between the various Goofys all crashing into each other, the fans punching each other in the stands, and the ref trying to avoid getting hurt. 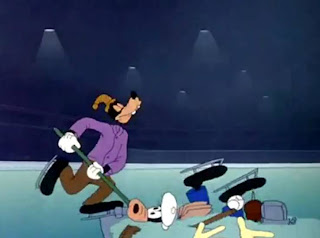 This short has the most energy of any short I’ve watched so far in 1945. It almost feels like a Looney Tunes style short because of the rapid fire gags and quick back and forth action. The brilliant animation staff brings things to a fever pitch, then blows a whistle for intermission, freezing everyone on the ice. It gives the audience a second to breathe before the frenzied climax. 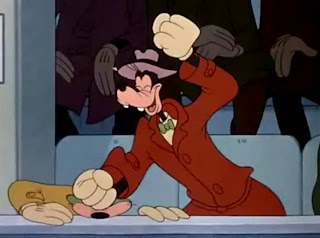 That climactic sequence is hard to describe. It moves from the frantic nature of the hockey game as it was before the break to an all out chaos. The ref drops all the pucks, which means there are pucks flying everywhere. Fans storm the ice and start getting into the action, and we get quick cuts flying all over the place, bringing in scenes from the other Goofy sports cartoons! 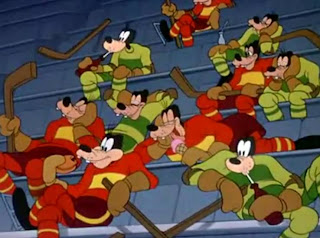 The fast paced ending builds and builds and builds to the slow pan up to the stands, where we see the hockey team sitting and relaxing, rather than getting caught up in the craziness. It’s a slow reveal that hammers home the end of the short. Hockey Homicide leaves the viewer breathless up to that point, then slows it down for one last belly laugh. This is a short not to be missed.