When I was watching No Sail, the latest short from 1945, I realized that it had been quite some time since I had seen one of the Fab Five team up with someone other than Pluto. Having Donald and Goofy together in this short reminds me how much fun those earlier shorts were, and how they really helped to define the characters. 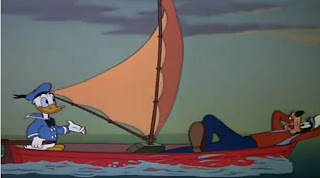 After all, Donald and Goofy starred in lots of black and white shorts with Mickey before getting going full speed on their own. We even have had Donald and Goofy team ups before, so seeing them together in No Sail is not a surprise. The two play well together, because Goofy is so nonchalant and easy going, while Donald is crazed and a roller coaster of emotions. It makes for a great contrast. 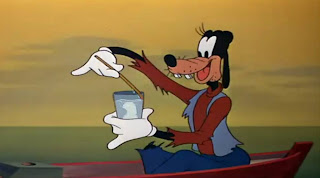 The contrast is the source of the funny in this short. While Donald and Goofy go out to sea on the coin operated boat, Goofy takes it in stride when they get stranded. Donald, needless to say, does not. Instead, he quickly becomes irritated and starts scrambling for anything he can do to remedy the situation. This, of course, makes the situation worse. 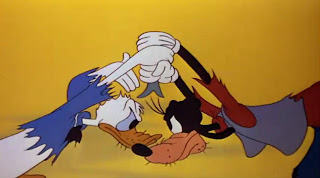 I particularly like the emotional ride that Donald goes on throughout the short, as we see him so excited and happy to join the expedition, then disappointed when the sail retracts and all the way to angry when Goofy waves at a passing ship rather than attempting to get them rescued. 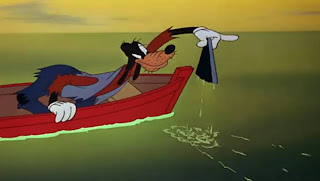 It’s the subtle touches that made this short funny. The stubble that grows on Goofy and Donald after only a few moments in the boat is one example, but not the only one. The recurring gag of the main sail clobbering Donald on the head is well done, too. I laughed every time I saw it. The frantic ending, with Donald overboard and being chased by the sharks, is also fabulous. 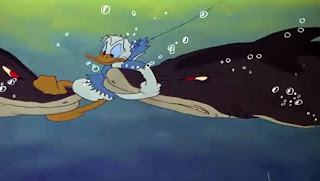 It’s a wonder that Donald and Goofy were not teamed up more, because the pairing is so natural. In this short, combined with an out of the way setting, it makes for a great short. This is definitely one that should be on your must-see list.