A suave and debonair Donald Duck is an interesting change to the traditional Donald formula. As presented in Donald’s Double Trouble, we get to see what life would be like for Donald Duck if he were well spoken, well-mannered and a perfect gentleman. The ingenious step, of course, is to have our normal Donald there alongside the new and improved version, to make the contrast even better. 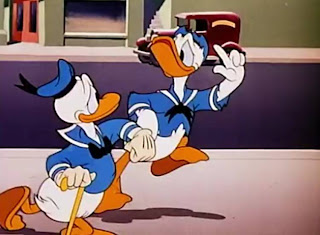 Donald Duck is taking a lot of heat from Daisy as this short begins, mainly for being the same Donald Duck we have all grown to know and love. To be fair, if you were dating the angry and unintelligible duck, you might want him to change as well. The problem is how will Donald change the things that make him so unique? 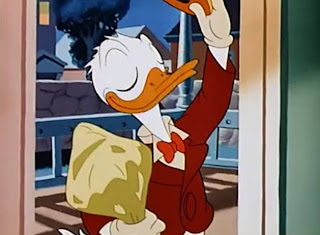 A solution presents itself rather quickly, as the double rounds the corner right after Donald’s blistering conversation with Daisy. The idea instantly comes to our fowl protagonist to have the “better” version stand in for him. But it’s not until Donald shows his double a picture of Daisy that he agrees to do it. 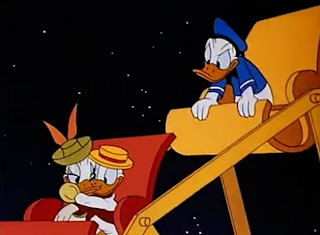 The contrast between the two could not be clearer at that point. Where Donald is in the moment and focused on the problems at hand, the double is looking ahead, plotting his attempt to woo Daisy over to his side. As we go forward, we see the double calm, cool and collected, while Donald loses his temper every few moments. 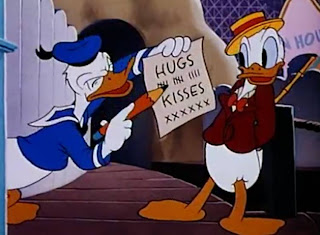 My favorite gag in the short is the bell ringing that Donald hears in his head every time that Daisy and the double kiss or show affection. It seems like an annoyance, which it can be for a second, but it’s a gag that pays off in the end. When the double and Daisy go into the Tunnel of Love during the finale, the bell goes off in Donald’s head, even though he can’t see them. That’s the signal that it’s time for Donald to intervene, which he does in hilarious fashion. 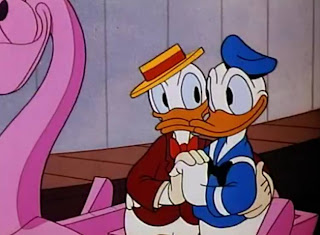 The contrast is the fun of this short, and it works fabulously. Seeing a Donald Duck that is out of the normal expectations is great fun. Making that Donald even more scheming than the original makes it more fun. Donald’s Double Trouble is a great short that takes a new twist on Donald, making it a novelty in 1946.