A Knight For A Day

1946 is finally here on the blog, with a new Goofy short.  In A Knight for A Day, we get a nice new twist on the formula of the Goofy shorts, in a way that manages to make things feel more original. We’ve seen sports shorts before, such as the brilliance of Hockey Homicide, but in this short, the animators combine a medieval tale of jousting with the modern form of sports commentary to make a really fun piece of work. 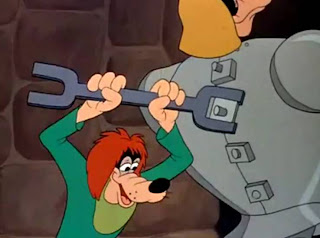 We are introduced early on to the idea, as the short opens with an announcer building up the event that we are about to see, a joust in the courtyard of a castle. Rather than extolling the virtues of the event through flowery medieval language, the narrator uses the terminology and language of a sports announcer. It sounds like the old time radio announcers you may have heard before, in the best possible way. 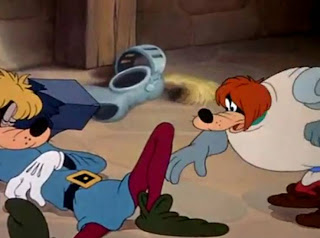 The juxtaposition of the modern sports announcer with the medieval setting makes for some great comedy. The fact that Goofy is the main character only adds to that. Here again we have the case of multiple Goofys, portraying all the characters. We see the main Goof, a young squire named Cedric preparing his knight for battle. When an unfortunate accident occurs, it is up to Cedric to fill his knight’s armor and fight in his stead. 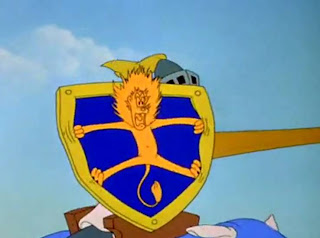 Cedric is sadly outclassed by his opponent, the cleverly named Sir Cumference. It gets to the point where even Cedric’s shield is scared and the lion on it runs away. It’s a fun gag, one of many during the jousting sequence. We get some great fun with Cedric trying to hold his own even as he figures out what to do next. 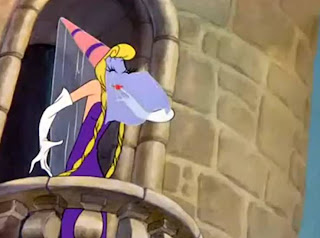 The ultimate strategy he comes up with is ingenious. Rather than let the larger man attack, he employs the old rope a dope strategy, letting the big knight tire himself out by pounding on the armor over and over again. All of this is to win the hand of a lady, who Cedric ends up with in the end. 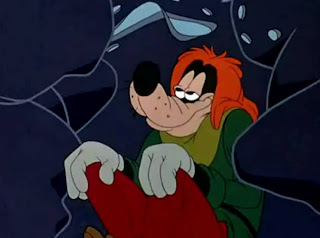 All of this comes together to be a fun and fast moving short which is wildly entertaining. It is a true testament to the creativity of the Disney story team that they were able to take something like the formula of the Goofy shorts and stretch it to fit this format. As a sucker for medieval tales and Goofy, this one hit my sweet spot.