In my years (has it been that long?) of watching the Disney shorts, I’ve learned that Pluto needs a foil. When he has a chance to play off of someone, Pluto is a fun character who can be truly entertaining to watch. In Purloined Pup, Pluto gets to work against Butch, the bulldog character he has matched wits with before. That simple formula creates a fantastic short for Pluto. 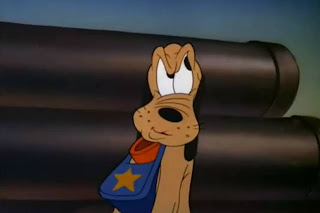 Pluto enters the film as a police dog, on the trail of a missing dog heir. It’s immediately laid out in the old spinning newspaper gag that Butch is the one who kidnapped the dog. Our first shot of Pluto in the short comes with a police badge around his neck and it makes all the difference in the world. 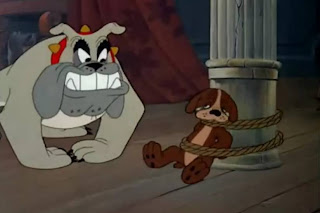 Giving Pluto a purpose and a direction makes him so much more focused. Typically we see Pluto darting around from gag to gag with no real reason why. Giving the police dog angle to him was an inspired touch. It doesn’t hurt that the gags are so magnificent in this short, either. The combination of story and well done gags are so potent here that you wonder why there were not more stories of Pluto in this vein. 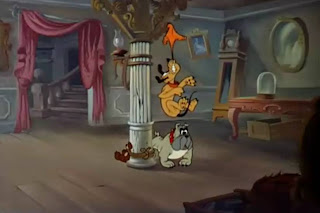 My favorite gag in the short is when Pluto is sneaking into the abandoned location where Butch is keeping the stolen puppy. He nearly gets caught by Butch but instead manages to dangle himself just above the bulldog, hanging by his teeth on a string. Watching him dangle there ups the stakes of the short while providing fantastic comedy. 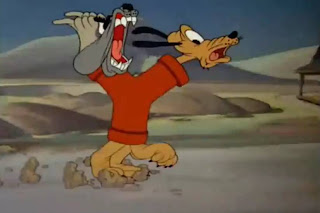 When he ultimately is able to break the puppy out and the inevitable chase ensues, it picks up the pace and makes things feel more exciting. It’s really just another set up for running from gag to gag. There’s another great one that features both Butch and Pluto in a connected pipe running around. 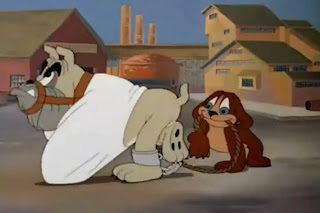 Purloined Pup ends up being one of the better Pluto shorts because it allows Pluto to be both heroic and goofy at the same time. He’s doing something brave by taking on Butch, but still manages to be the silly, loveable Pluto we’ve come to know and love. It makes for a fun, fast moving and satisfying entry in the series.