Can you believe it? After years of neglect, Mickey returns to the Disney shorts with Squatter’s Rights. Perhaps it is a stretch to say that he returns, however, because Mickey is merely the catalyst for this short, which really focuses on Pluto’s quest to rid their stove of Chip and Dale. As is usually the case in these later years, Mickey is merely window dressing. 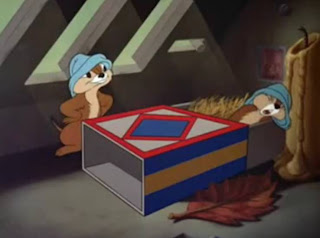 Chip and Dale made a previous appearance to menace Pluto and now have returned to cause more mischief. The characters are back and will continue to become more a part of the Disney landscape in years to come, mostly as foils for Donald Duck. Pluto, though, always works best with a smaller or less menacing foe, and this plays to his strengths. 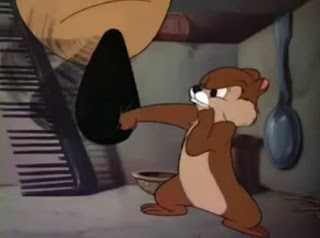 Chip and Dale have been camping out in Mickey’s log cabin, specifically in the stove. When Mickey and Pluto return to the cabin for what appears to be a hunting trip, the chipmunks are in a bit of trouble, since Mickey will want to cook things. Pluto sniffs out the interlopers when he goes to load the stove, and the first 2/3 of the short are about them defending their adopted home. 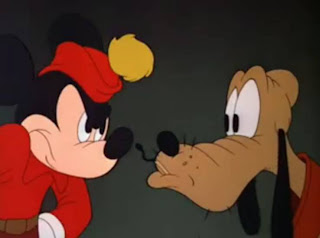 It’s sort of a “Home Alone” style plot, as the chipmunks come up with several different schemes to keep Pluto out. I enjoyed the slapstick humor of this part of the short, but it does tend to drag on a bit. Chip and Dale are entertaining enough, but you don’t get much personality out of them, or any kind of special gag. 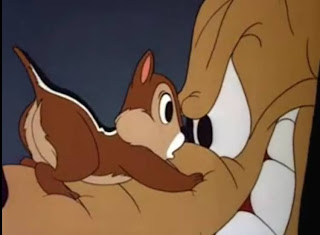 Once they leave the stove, though, and Pluto begins chasing them through the cabin, things pick up a little bit. The chases and chaos you would expect from Pluto taking on Chip and Dale occur in this part of the short. It’s that fast moving action and chaos that makes Pluto his best. Adding Chip and Dale to the mix makes it that much more compelling. 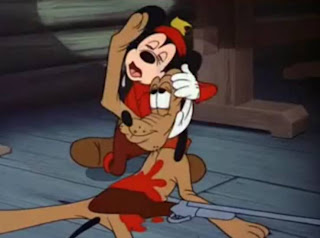 The gag that tops them all, though, is Pluto getting his nose stuck in a rifle over the mantle. If he pulls to hard to get out then the gun will go off and shoot him. The delicate dance of Pluto getting out and Chip and Dale egging him on ends with a funny little bit that solves the problem of where the chipmunks will live. It’s an inventive solution that is a credit to the story team, and makes this a short worth watching, despite its low Mickey content.