Seems like its all Pluto, all the time lately, but the next 1946 short features the main Disney dog again, this time in a different setting. In Dutch takes Pluto and moves him to a foreign setting, mixing things up a bit, and is much more cohesive and interesting than some of the more recent Pluto shorts. 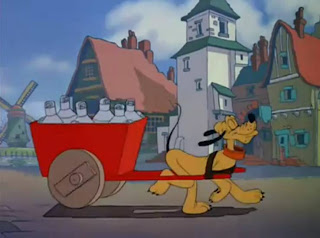 That’s not to say that In Dutch is altogether great, but it does a good job of having one consistent story and serving the main character well. We get Pluto as a milk delivery dog here, making his deliveries in a small Dutch town. It’s an interesting choice, because we see Pluto as an independent dog, without an owner or a dog house to hold him back. 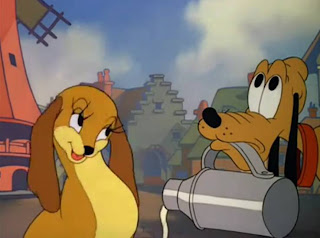 We get a complication, though, as a female dog shows up with a mind to get her paws on some of Pluto’s milk. Strangely, that is a literal statement, as the female gets Pluto to pour some milk in a bowl and eventually even in some flowers so she can get a drink. The interplay between Pluto and the female is fun and flirty. It’s very lighthearted and sets a nice tone for the short. 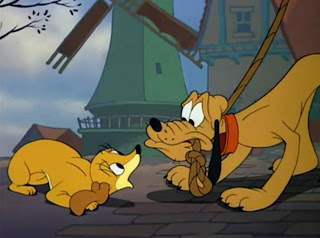 In their flirtation, however, the two get tangled up in the town’s warning alarm bell for the local dam, which every good Dutch town must have. Apparently there are a lot of Dutch towns built near flood plains, if cartoons are any example. When the villagers see that this is not a broken dam emergency, however, they get a little irritated. 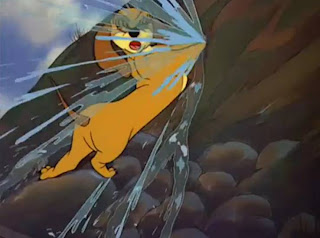 You can see where this is going, and although it’s predictable, it’s still fun. The next time that the bell is rung, it’s Pluto ringing it on purpose because the dam is actually breaking. The nice twist that the animators put on the old “boy who cried wolf” tale here is that Pluto has to find a way to get the townsfolk’s attention. So, he decides to go through and destroy things to get them to chase him. 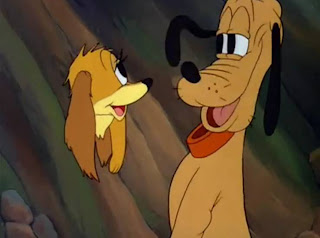 This little sequence of Pluto destroying things and causing havoc in the town is the most fun I have had watching a Pluto short in a long time. We get to see him being intentionally mischievous while still serving a higher purpose of saving the town. The damage he does is minimal, but it’s still fun to watch.  The main complaint I have is that by the time Pluto arrives at the dam, his lady friend has already fixed things. If that was the plan, then why go get the townspeople? The logic doesn’t quite make sense, but that’s a minor quibble in an otherwise enjoyable short. My hope is that Disney keeps up this kind of sort with the remaining 1946 Pluto shorts.