There seems to be a glut of Pluto shorts as we delve deeper into the 1940s here, and I’m not entirely sure that’s a good thing. As discussed before, Pluto is not easy to do well, and is very easy to do in an offhand way, where the shorts are not very good. Pluto’s Kid Brother unfortunately falls into the latter category, which is kind of sad. 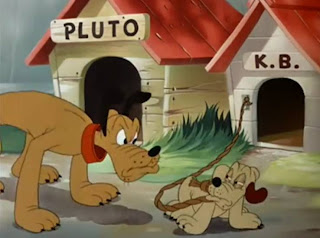 There is definitely some possibility in giving Pluto a little sidekick, which is what this short attempts to do. Since Pluto is generally rather irresponsible, it seems like having a younger dog around might be a good thing to shock him into a different kind of behavior that would be a new twist on the character. The key, though, is that the younger character needs to be compelling, and K.B. (yes, they named the character K.B. for Kid Brother) is not great. 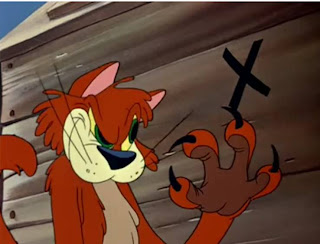 The short is not helped by the fact that the story of this short is all over the place. Things boomerang from Pluto’s point of view to K.B.’s and back, but never with one coherent through line. It doesn’t really make sense what the main plot of the short is, other than K.B. getting into things. 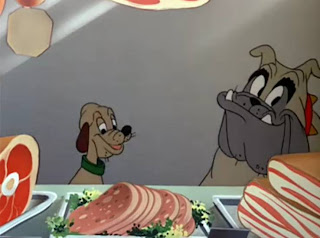 If that was the main idea, that would be okay, but there is a whole section of the short where we deal with Pluto running away from a cat. If it sounds weird, that’s because it is. There is no involvement of K.B. in the cat storyline, other than the fact that he gets the cat riled up in the first place. Once the cat gets on Pluto’s case, however, it’s a long diversion from K.B. to Pluto’s losing war with the cat. 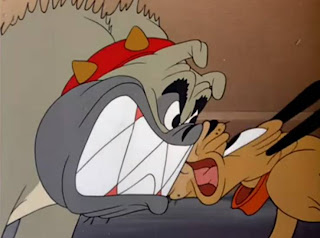 Then we have a bulldog that enters the picture, and K.B. decides to follow him, leading to another strange story. We see the bulldog and K.B. deciding whether or not to invade a butcher shop, ending up with the little dog entering through a delivery chute and pulling out a bunch of sausages. Pluto comes to stop him, but even that is strange, as at first he’s gung ho with the bulldog and then backs away. 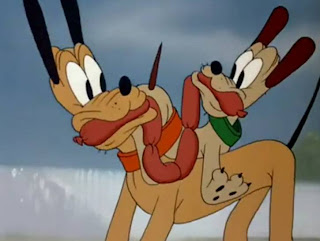 The whole short is disjointed and not well constructed, which is very odd for a Disney short. We all know that Disney prides itself on a well told story, especially when Walt was around. It seems this was an attempt to create a new character, but not neglect the old one. In the end, Pluto’s Kid Brother services neither, and creates a muddled mess.

All images copyright Disney.  All rights reserved.
Posted by Ryan at 11:21 AM