As previously mentioned, Fun and Fancy Free consists primarily of two featurettes that Disney was unable or unwilling to develop into full length features. Using Jiminy Cricket as the bridge device between the two, the film launches into Bongo as the first subject. 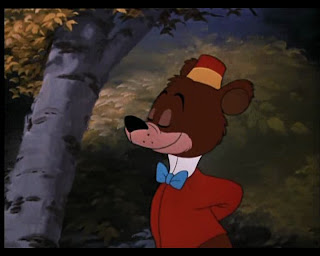 Bongo is a character in search of a story, as best I can tell. The story told in this film is that of the circus bear who escapes, only to see that life out in the open is not as easy and carefree as he might have imagined. When he meets a female bear, Lulu Belle, however, that changes. Although he has to overcome some challenges for her affection, Bongo ultimately prevails and is able to win her heart.

It’s a very slight story that could honestly have been told in a 7 minute short, so seeing it stretched over 35 minutes is a problem. It’s kind of like spreading your peanut butter too thin. While you still get some peanuty goodness, in the end it’s not enough. Bongo is that kind of effort. There’s good stuff in there, especially the animation and some of the storytelling, but the overall story is lacking. 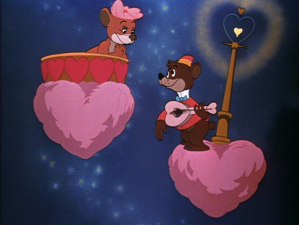 A couple of things that seem like they were put in the film to alleviate that problem actually tend to make it worse. The first is the narrator Dinah Shore, who handles all the dialogue for the characters. That leaves every character in the film silent, trying to act to Shore’s intonations. Unlike Dumbo, where the main character doesn’t speak but the others do, it makes every character reliant on the narration, and that lessens some of the impact.

The other thing that pads out the film is a grouping of songs. From “Lazy Countryside” to songs about the bears falling in love, the musical portions are very lengthy and although they advance the story nominally, they also slow it down considerably. Add in the fact that Dinah Shore sings all the songs, and you have one voice throughout the entire film. 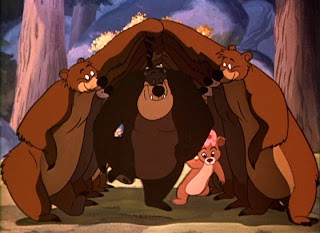 This is not to say that the entire thing is bad. The character designs for Bongo and Lulu Belle are completely adorable. The acting between them and the emotion that the animators embue them with is fantastic, especially considering that they had no voice acting to cue them. Also, the gags in certain places are quite funny, even though many others don’t quite hit the mark.

In the end, Bongo learns that you need motivation to change, which comes in the form of Lulu Belle. But it’s very hard to connect to either he or Lulu Belle as characters, despite the great work that the animators do. It never gets to the point of boring, but Bongo drags a great deal, and makes it hard for the viewer to remain engaged with the characters.