We’re wrapping up 1947 in the Disney canon with a Pluto short. I’ve said before that my feeling on Pluto is that he is a difficult character to do well. Doing Pluto correctly leads to some great gags and animation, as he is able to stretch and contort unlike many of the other characters. When this doesn’t happen, though, it’s a little more routine, and that’s the case with Pluto’s Blue Note. 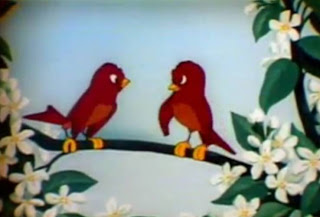 There are two basic gags in the short, and they each do the work in approximately half of the short. The first one is Pluto’s desire to sing like the birdies sing, so to speak. He wakes up in the morning, hears the birds chirping and attempts to join in, much to the chagrin of the birds. The gag here is that Pluto, a dog, cannot sing as well as a bird. Do you see the funny? 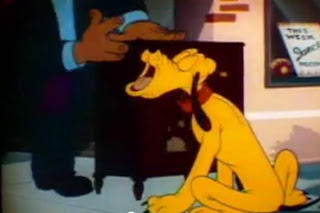 The problem with this gag is that it doesn’t take advantage of one of Pluto’s best assets, which is his physicality. The movements and slapstick comedy of Pluto makes him funny, so if he’s standing still trying to sing, it takes some of the fun out of things. However, he does get some action going when he tries to imitate the bees (flapping his ears like wings) or the grasshoppers (rubbing his legs together). Those are decent pieces, but not Pluto’s full potential. 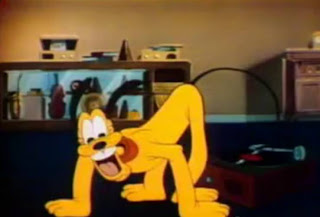 The second half of the short deals with Pluto’s revelation that he can use his tail and mouth to create a record player of sorts. After wandering into a music shop when trying to sing like the radio, our favorite dog discovers that if he places his tail on the record, then the sounds come out of his mouth. While it’s a decent gag, it again relies on Pluto being still to work. 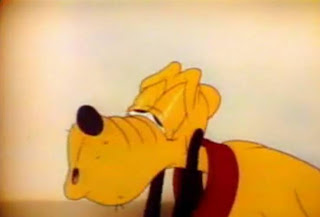 The coda to this gag is when Pluto installs the record player into his dog house, and woos the lady dogs of the neighborhood with his crooning. I’ll be honest, I expected a gag to come out of this, like the record skipping (which it does) and a revolt among the animals. But for the most part, Pluto sings the whole song, winks at the camera, and ends the short. It’s a slow, disappointing ending to the short, and honestly not that funny. Pluto’s Blue Note serves as an example of paint by numbers style filmmaking, and it suffers in comparison to most of the earlier Pluto shorts.