For an audience in 1947, to go from Mickey in Fun and Fancy Free to Mickey in Mickey’s Delayed Date would have to be a form of whiplash. After all, the design of Mickey in the feature film is much closer to what he was before the war, and the short is not even close to that same design. It’s a jarring transition for me watching these films back to back. 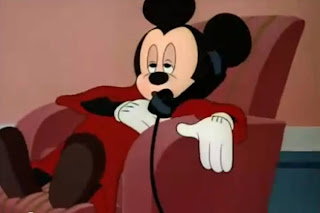 Sadly, part of Mickey remains intact from the feature to the short, and that’s his bland personality. The mouse who used to be so mischievous and fun loving is now a generic bachelor, devoid of personality. It’s a trend that we’ve seen often in the post-World War II shorts. Donald and Goofy have also been cast in generic roles quite often, where you could have swapped one for the other and it would not make a difference. 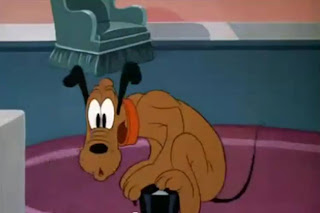 The premise of Mickey’s Delayed Date is that Mickey and Pluto are napping when Minnie calls up. She is upset, because Mickey is supposed to be out with her for a hot date. The rest of the short is spent with Mickey trying to get ready and arrive to the date on time. It’s no easy task, since he was dead asleep when Minnie called, so the entire first half of the short is a mad scramble around his house to get ready. 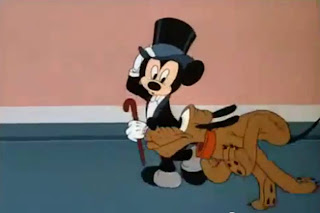 Further taking away from Mickey, however, is the fact that Pluto does most of the work in the first half of this short. Mickey is in the shower, so we get to see Pluto struggle around the room trying to get Mickey’s hat and clothes together. It’s okay, but doesn’t really stand out in the major gags that Pluto has been involved in before. 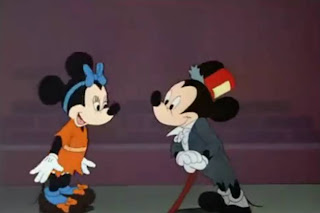 The second half of the short is Mickey’s journey to the date, which involves a lot of stumbling through a large city, falling into things and ending up looking like a bum. That turns out not to be a problem, but it is a much needed change from the first half. Still, it’s not quite enough to salvage a short that features too little personality and originality, especially for Disney’s flagship character.