Fun and Fancy Free - Mickey and the Beanstalk

The second half of Fun and Fancy Free is completely disconnected from the first, and in many ways that is a good thing. We get to see Jiminy Cricket hop houses over to a party being thrown by Edgar Bergen, the famed ventriloquist, where the only guests seem to be his puppets and the child actress Luana Patten. Seems like a strange gathering, but nonetheless, it leads to Bergen telling the story of Mickey and the Beanstalk. 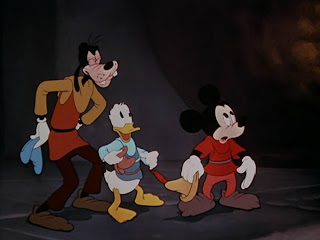 It’s worth noting that this is an updated version of Mickey appearing in this short, while Donald and Goofy appear much the same as they did in Saludos Amigos. Still, it’s the first time that all three of them appear together in a feature, which makes it noteworthy. It would have appeared a little odd to moviegoers of the time, since they had not appeared in shorts together since before World War II. Remember, though, that this film was in development before the war, so Disney simply picked it up where they left off.

There are no real surprises in the story, since it is the familiar tale of Jack and the Beanstalk, but what’s more interesting is the interplay between the animated characters and the narration provided by Bergen. If you’re not familiar with Bergen, he was a great friend of Walt’s, and is most remembered for the two characters who appear in this film, Charlie McCarthy and Mortimer Snerd. In providing the narration, Bergen and his characters dominate the film. 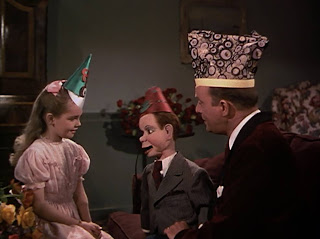 Mickey rarely speaks. Nor does Donald and Goofy speak very much. We get little glimpses of the interplay between the three, with Donald losing his mind over the lack of food or Goofy being quite silly when singing about his desire to eat until he dies. But for the most part, the characters are flat compared to their interpretations in the shorts. 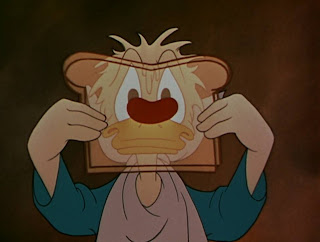 Instead of gags and interactions between Mickey and his cohorts, we instead get jokes told by Charlie McCarthy poking fun at Edgar Bergen. While that’s part of their act, so it’s not a surprise, it’s not what you would expect from a film with Mickey, Donald and Goofy. That’s not to say that the story isn’t fun, however. It is quite a good and enjoyable cartoon, just not particularly notable for the Mickey, Donald and Goofy stuff. 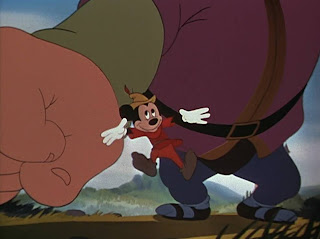 The animation quality is superb in this, which really helps. There is a lot of depth to the line work, and the motion and emotion of the characters is told very well. It’s a fun time to watch, with the pace much quicker than Bongo. Mickey and the Beanstalk works very well, but there is not a lot of usage of the unique traits that Mickey and friends bring to the table. That’s unfortunate, but it doesn’t stop this second half of Fun and Fancy Free from redeeming the film.