We’re back to Pluto with Mail Dog as the latest short in 1947. And as if keeping with the theme so far in this year, it’s a bit disappointing. As we’ve said here before, Pluto is a difficult character to do well, since he does not talk and does not move or act in a human way. To make him interesting, the animation and story team has to deliver top notch work. 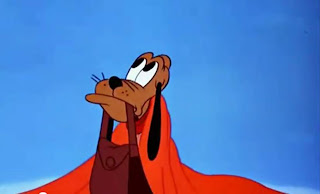 In Mail Dog, the concept is pretty good. Pluto serves as a dog in the winters of the North, whose sole purpose is to carry mail across the frozen tundra in storms where planes could not traverse. The short takes the first minute to set up this premise, without a sight of Pluto. That’s an interesting decision to take that much time, but it does set things up well. 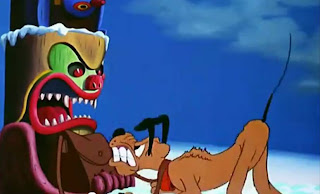 From there, it’s a quick sprint through two confrontations where Pluto is trying to make his appointed rounds. The first of these is with an inanimate object, which is not bad. Pluto gets his mail bags stuck with a totem pole, and seeing him struggle against the inanimate faces is pretty amusing. This is the kind of thing that works with Pluto, seeing him struggle with things that should be routine. It plays to the fact that he is a dog, and not a person. 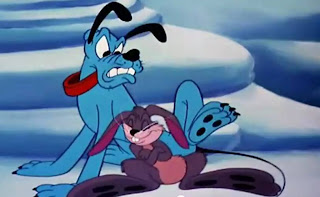 His second encounter, with a rabbit that must have lost its way a long way away, is less amusing While the rabbit is merely interested in getting warm, and goes to great lengths to do so, while Pluto is trying to simultaneously stay warm and deliver the mail. The problem is that the conflict between the two seems forced, and not natural other than the fact that both are freezing. 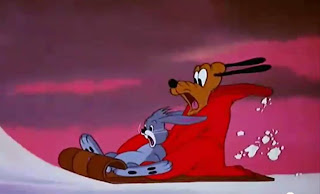 I’ll give the animation team credit for an ending that is heart warming and fun, but it doesn’t make up for a short that tends to drag through the middle. Without some real fun gags, the short doesn’t measure up to the type of work that we have seen in other Disney work of the previous years. Especially when you look at Fun and Fancy Free or other feature work, the shorts like Mail Dog are not in the same league.