Another day brings another Donald Duck short in 1947, this time with Donald squarely in the spotlight. You’ll remember that recent shorts have been cast as Donald Duck shorts only to have Daisy or other characters form the core focus of the story. That’s not the case in Wide Open Spaces, as this goes back to the formula of Donald being presented with a series of challenges. 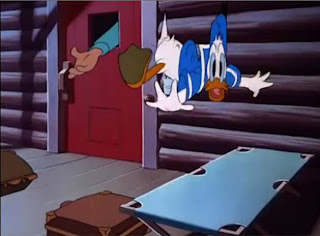 The main problem Donald faces in this one is finding a place to sleep. He attempts to find a hotel, but backtracks on booking it when he finds out that the cot outside the door is $16 for the night. It’s a really interesting bit, because the name of the hotel is the “Hold Up Motel,” with a picture of a gun on top of it - definitely a commentary by Disney that the hotel is gouging the consumer. Very intriguing in retrospect, right? 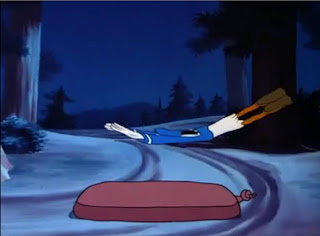 Instead of bunking down in the hotel, Donald attempts to go out and find a flat spot to lay down an air mattress, but runs into all sorts of troubles. He ends up attacking trees, falling underwater and generally doing anything but falling asleep. It’s the kind of accidental antics that you would expect from Goofy moreso than Donald. Donald seems to be stumbling into the situations instead of an active participant. 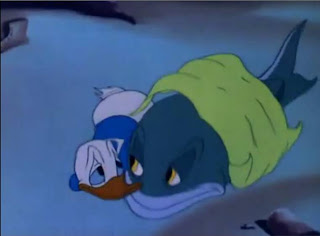 That’s the big reason why Wide Open Spaces doesn’t work for me. Donald, as mentioned before, should be an angry, bitter duck whose frustration rises throughout the short. That’s when he works best, such as in Modern Marvels, one of my favorite Donald shorts. This short does not feature that. Instead, it focuses on the gags over the characters, not showing the kind of story that makes Donald work best. 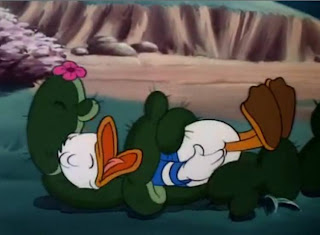 Sadly, that’s very typical of the Disney studio in 1946-1947. The entirety of the studio is in kind of a drift during this period, figuring out if they are a feature studio, a short cartoon studio or a live action studio. The answer, of course, was all three, but in the interim, product had to be produced to fulfill contracts and keep the doors open. In the process of producing the product, it seems the artists and storytellers forgot a little about their characters.

All images copyright Disney. All rights reserved.
Posted by Ryan at 12:13 PM