The last of the 1928 Mickey Mouse films is The Barn Dance, which is a strange little short. However, it may give us a better insight into Walt and the animators than some of the earlier shorts.

At its core, The Barn Dance is simply an extension of Rival Romeos, the Oswald cartoon. Mickey and Pete show up at Minnie’s house, looking to take her to the dance. After some waffling, Minnie ends up with Mickey, and they go to the barn dance. In the barn, Mickey has some trouble dancing, constantly stepping on Minnie’s feet, so Pete cuts in. Mickey tries to come back, popping a balloon in his pants to keep his feet up, but after Pete pops the balloon, Mickey ends the short alone. 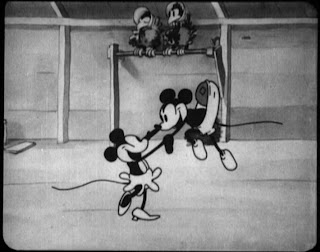 The story is simple enough, but there are some great gags. When Mickey’s constantly stepping on Minnie’s feet, his feet grow larger and larger. The comedy of seeing the oblivious Mickey and the increasingly dismayed Minnie is classic. 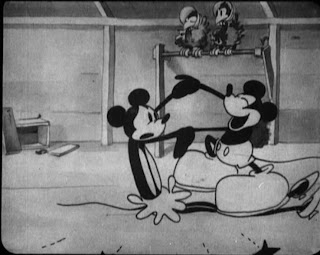 The score is actually very repetitive in this short, where as it was varied in The Gallopin’ Gaucho and Steamboat Willie. Most of that is due to the music being played at the barn for the dance, but it’s not that varied even in the first portion of the film. The voices of the characters, which have been poor in the previous shorts, are done better here. Mostly, the characters just have musical cues or light squeaks that are not as distracting as they were in the earlier shorts. 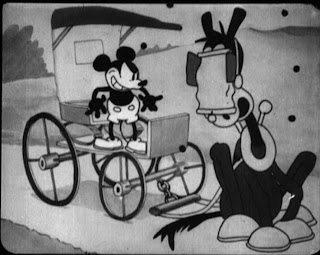 What really stands out to me from this short, though, is what it reveals about the men who made it. One key sequence to me is right at the beginning. Mickey pulls up to Minnie’s house in a horse and buggy, followed shortly by Pete in an early model automobile. When Minnie comes out, she chooses Pete first, but the car falters. Then, she goes over to Mickey and the horse and buggy. 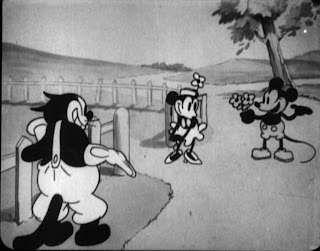 It’s an obvious commentary on the value of old-fashioned ways of doing things, and it’s very interesting, considering what had happened before. Remember Walt selling his car to finance the second recording session for Steamboat Willie? Think he might have held a little resentment towards cars later in 1928? Just a thought, but it’s something to consider.

The actual barn dance itself is another reflection of the animators. Having come from the Midwest themselves, you would think that most of them had been to one of these dances. Their audience in New York or Los Angeles probably had not. So, the animators were able to bring some of their background to a whole new audience, making it feel fresh and new. The Disney animators definitely grounded Mickey in barnyard humor in his early shorts, so it will be interesting to watch the settings change as we go along.

The Barn Dance is good, but not outstanding. There are no real standout pieces of animation, and it just doesn’t stand out to me among all the shorts I’ve seen. However, the quality is still much higher than the Alice Comedies, and on par with many of the Oswalds.
Posted by Ryan at 4:13 PM