The second Mickey short animated was The Gallopin’ Gaucho, a nice little adventure showing what Ub had really intended for Mickey. At the time, the animator extraordinaire thought of Mickey as Douglas Fairbanks, the popular actor of the time. He was not the every man that Oswald was supposed to have been, but instead, Mickey was more of the adventuresome type, who took what he wanted, found adventure and followed his own path. That’s very evident in this short, which shows a completely different side of Mickey than the symbol of family entertainment he would become. In this short, Mickey is a wanted man, who swings into a cantina and show off his toughness by smoking a cigarette, drinking a beer, and dancing the tango with Minnie.

The story follows a familiar tune to anyone who watched the Oswalds – after Mickey wins Minnie over, Pete (at least I think that’s who it is) shows up and kidnaps her. Mickey goes after them, then manages to best Pete in a swordfight before escaping with Minnie. 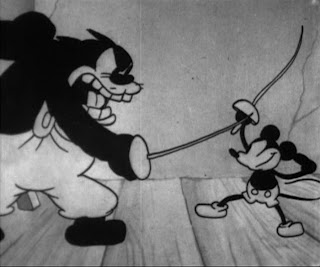 There are not as many changes in the animation in this short as there were in Plane Crazy, but here are still some interesting things to note. In the beginning, Mickey rides in on an ostrich, and comes back to it during the chase sequence. The ostrich provides a very good example of rubber hose animation, where the limbs of the characters flop about like a rubber hose, in an entertaining manner. 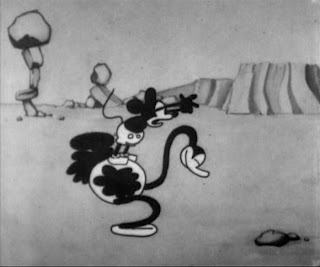 There’s also some great personality animation here, as you can see the derring-do in Mickey’s eyes when he swings into the cantina, the fire as he dances with Minnie, and the anger when he discovers his ostrich is drunk and not as useful as he might hope in the chase after Pete. 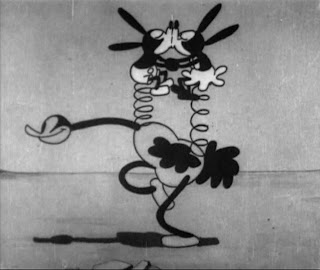 The actions of Mickey, though, are what really stand out. A Mickey that smokes, drinks beer, picks up women in a cantina and swordfights without fear is quite different than the image that most people carry around in their heads. It really typifies the difference in what the intention was for this new character and what he ultimately became. 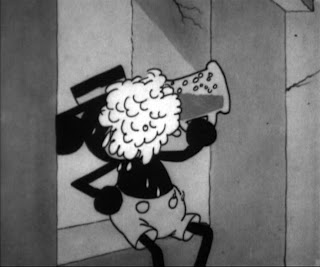 Eventually, it would be Walt’s “watering down” of Mickey that drove Ub Iwerks away from the studio. Ub felt that he should be able to experiment with Mickey, while Walt was trying to find the best fit for his audience. It was a creative struggle that would define Walt to some degree. But that’s a story for later on.
(Update - 5/20 - Please read the comments, as David corrects me on this. It was Ub who wanted Mickey as the everyman and Walt who was looking for the adventurer. This does make more sense when you look at the next few Mickey shorts. My understanding that it was the other way around seems to have come from a passage in The Hand Behind the Mouse that I must have misinterpreted. So, read the comments and I'll address this in a future post.)

The Gallopin’ Gaucho is also an example of the cohesive storytelling that developed in the Oswalds. Just like Plane Crazy, there is a simple plot – Mickey the gaucho finds Minnie, Pete takes her and a chase ensues – but that plot is the framework around which many gags are constructed.

Next up, the one the really started it all for Mickey – Steamboat Willie.
Posted by Ryan at 4:32 PM