The last of the Oswald shorts still available for me today is Tall Timber, which again features Oswald in a solo role. It’s a very interesting cartoon visually, and has some great gags, but there’s no connective tissue to the story, merely a succession of gags. It’s really a throwback to the Alice series in that way, and somewhat of a deviation from the previous Oswald subjects.

The story, such as it is, just features Oswald on a journey through the wilderness, first off in a canoe. There are some great close-up shots of Oswald as he paddles along the river, offering a different perspective from the normal sideways shots. 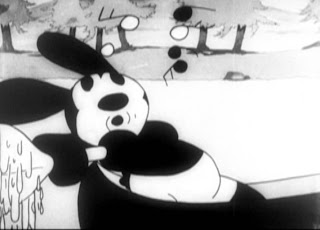 Of course, not everything goes according to plan, and soon Oswald is carried over the falls, going through all sorts of contortions and gags to try and avoid the rocks and sink his boat. Nothing especially stands out, and the sequence seems to drag on just a bit. 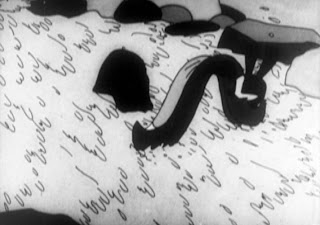 At the bottom of the falls, a duck menaces Oswald, causing him to shoot a hole in his boat by accident. The duck manages to get Oswald to sink the boat, but the resourceful rabbit grabs on to a moose that carries him to shore. That does not mean safety, though, as Oswald soon is falling over forward, down a steep mountain face, with a boulder on his tail. He does his best to avoid it, but to no avail. 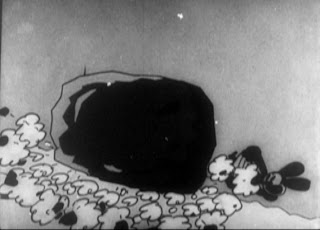 The boulder smashes Oswald up against a tree, which leads to the most interesting sequence of the film. In a close up, Oswald tries to stretch himself back out, which causes all sorts of distortions into the lens of the camera. It’s almost a fisheye effect, but it was done with animation. It’s a great visual, and some inventive animation. 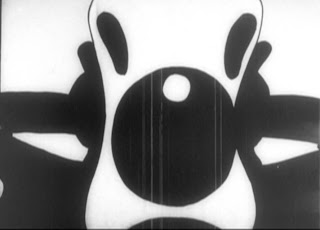 Oswald manages to get squished back to a round shape, and rolls down a hill into a couple of baby bears. The small bears smack him around and pull him back into his normal shape. Oswald chases them, only to run right into the mother bear. 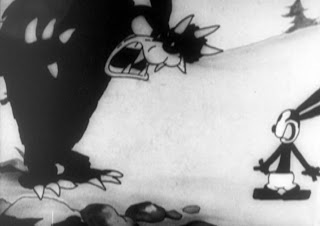 What follows is very familiar from the Alice Comedies – the bear chases Oswald into a cave, sound effects animation pop out from the cave, the bear leaves in its undergarments, and out comes Oswald in a new bear skin coat. It’s a familiar scene, but something about Oswald doing it makes it a bit funnier than when Julius did it. 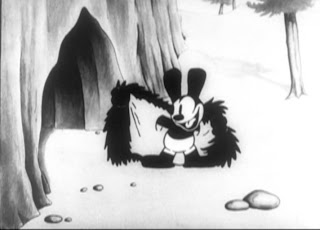 So that’s the last of the Oswalds. There were several that were missing from the Disney Treasures DVD, but I don’t have access to them, and I’m not sure how many of them survive. But what does exist gives us a good idea of what was going on at the Studio at the time. Tomorrow, I’ll post about the legacy of Oswald, and we’ll transition into the Mickey Mouse shorts soon.
Posted by Ryan at 5:45 PM