A busy time for me lately, but I still was able to make time today to take in Rival Romeos, the latest of the Oswalds. Although not as original and funny as Bright Lights, Rival Romeos still represents a step up in quality from the shorts, and it has some familiar gags that the Disney animators would come back to again in the Mickey shorts.

The story is a classic one, Oswald and Pete are vying for the affection of a woman. First, we see Oswald driving down the road, flowers in hand, dreaming of his sweetheart. He goes through a few plucks of the flower, but always is focused on his dream girl. 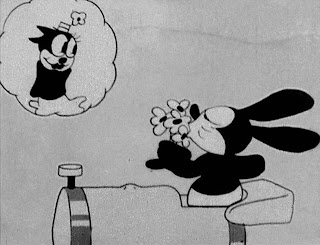 Then we see Pete come up behind him in a much nicer car. He’s impatient, so he honks at Oswald to move. The word “Honk” rises up in the air and settles over Oswald’s car, threatening him before Oswald knocks it out of the way. It’s yet another example of the animators turning effects words into action, and it’s well done here. 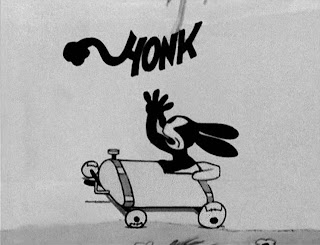 Oswald gets the lead in the race because he and his car are willing to wallow in the mud that covers the road, while Pete and his car are not. So, Oswald arrives first and begins serenading his sweetie from below. He throws the flowers up into her window, pulls out a guitar and sheet music and begins to sing. The perspective even changes so the viewer sees down on top of Oswald, just like his girl would be doing. That is a different camera move that has not been seen in the previous shorts. 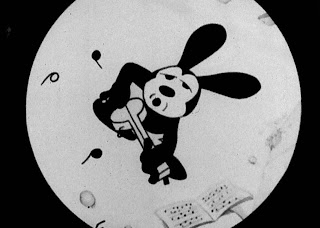 Of course, all does not go well. A goat eats Oswald’s sheet music, causing him no end of consternation. He turns to a familiar gag to fix the problem, turning the goat’s tail into a crank before making the goat into his music player. It’s something we’ll see again in Steamboat Willie. 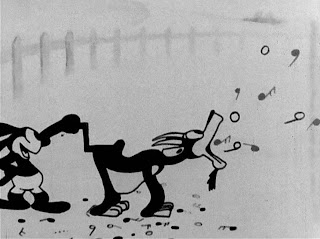 Finally, Pete arrives, and he and Oswald begin to battle over the affections of the girl. In the midst of their fighting, though, a monkey/dog looking gent comes up on bicycle with a sidecar. Honestly, he seems sort of like an early version of Goofy, although he is a little more monkey like in his body. The new guy rides off with the girl, leaving Oswald and Pete to kick each other for their stupidity. 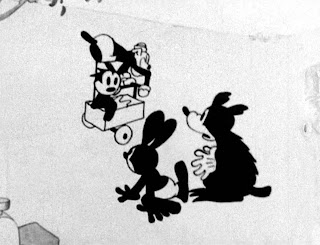 This is probably the simplest of the Oswalds so far as story goes, but there are a few tricks in the animation that show some stretching on the part of the animators. The change in perspective to show us looking down on Oswald is a great one. There is still more side to side motion and action of the cars coming towards us as well. However, overall it’s just a sweet, funny little cartoon, not a major milestone.

This far into 1928, though, we get a sense of what the Disney brand of cartoon is. The harshness and somewhat crazy tones of the latter shorts have disappeared somewhat, and you could easily imagine Oswald changing places with Mickey without any issue. It’s interesting to see that this style is already forming so early, when it was not until much later that Ub Iwerks and some of the other animators rebelled against the constraints that style imposed upon them. Food for thought.