Next up in our cavalcade of Mickey magic is The Opry House, a short that I really have mixed feelings about. It’s entertaining for sure, but it’s also somewhat repetitive, and it doesn’t feature any real standout sequences.

The short follows a very simple story – in a makeshift building, Mickey is putting on a vaudeville show for a variety of farm animals. The short opens with him outside sweeping up as the guests come in, and he even helps a large customer get in by pricking him with a pin to deflate him. The show inside consists of Mickey doing a Middle Eastern number as a snake charmer and belly dancer, then a piano playing sequence where the piano plays back. One thing you notice right off the bat is that this is a short that was designed for sound. From the very beginning, there are no musical notes flying in the air, and when Mickey starts whistling Yankee Doodle Dandy, he is really doing it on the soundtrack. It’s even more evident inside, when the music plays and Mickey is doing his belly dance. 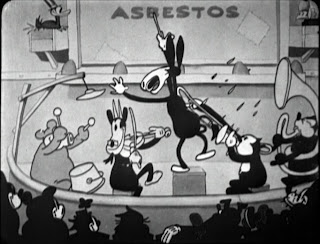 It’s also interesting to see another vaudeville show. It’s really a running theme, all the way back to Alice’s Wild West, when Alice put on a vaudeville style show in her backyard. There was a similar set up in Bright Lights, the Oswald short, which was in a bit more upscale setting. We’ll see this again in the Mickeys once we get to color. It’s rather obvious that Walt had a flair for showbiz. 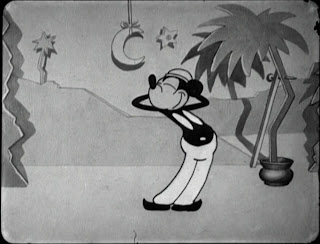 Even moreso, Walt has shown a preference for making barnyard animals into an orchestra. The orchestra in this short is made up of animals, but it also features acts like a pig yanking on a cat’s tail to make some of the music. Again, this is a recurring theme. Even in the Laugh-O-Grams, Julius did this with some of the animals, and we saw it again in the Alice Comedies and Steamboat Willie.

It’s obvious that there’s a barnyard humor theme throughout the early Mickey Mouse shorts. What’s strange is that there was not such a theme in the Oswald series. Oswald’s cartoons took place in the big city, on the plains of war, or on a mountain trolley. But so far in the Mickey shorts, we’ve seen Plane Crazy, The Barn Dance and The Opry House take place in a barnyard setting. Why the change?

I’m not sure what the answer is, really. It’s obvious that Walt and his animators were influenced by their backgrounds, but that didn’t affect what they did in the Oswald shorts as much as it has seemed to in the Mickeys. I have not seen many of the upcoming shorts, but as Walt’s success grew in 1929, the year The Opry House was released, he hired more New York animators. I’ll be watching to see if the barnyard ethos changes as that happens. 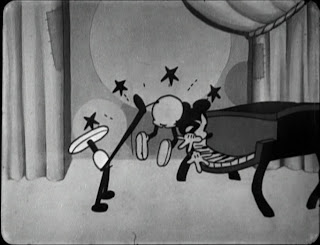 The Opry House is a good short, like I said, but there are some repetitive sequences. The piano sequence, with Mickey playing and the piano fighting back, goes on far too long. When Mickey’s playing, it’s not nearly as visually interesting as it is when the piano starts kicking him away and playing itself. The musical sequences are a problem in these early Mickeys, because they derail any chance at a story the shorts have.

All images copyright Disney. All rights reserved.
Posted by Ryan at 4:22 PM