There is definitely a formula developing among the Oswald cartoons that continues in Sky Scrappers. The basic idea is that Oswald meets and woos Sadie, Pete tries to interrupt, and Oswald saves the day. It’s a formula that would serve Walt well, as he revisited it in the Mickey days with Mickey and Minnie, but it seems to have originated here.

Sky Scrappers is not as entertaining as Oh What A Knight, but it is still a funny short. The basics are easy – Oswald and friends are construction workers, building a sky scraper in a major city area. 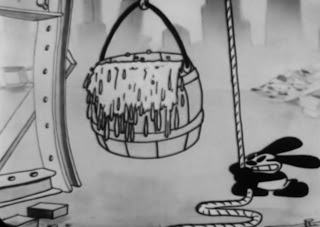 There are some neat gags in the beginning, such as Oswald getting wet and wringing himself out, the break whistle’s “Toot” floating over the workers, as well as a few others. The action truly begins, though, when Sadie shows up peddling box lunches. It’s rather obvious that she has only come by to see Oswald, though, as she sells him the lunch and then gazes adoringly at him as he eats. 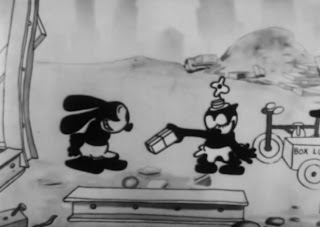 The two begin kissing, which Pete observes from above. He lowers down a hook, which, in the exact same gag we will see later in 1928 in Steamboat Willie, the hook picks up Sadie’s skirt and hooks into her underwear to raise her up. Pete grabs her, but she turns up her nose at him. 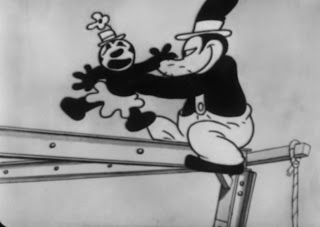 Oswald tries to scamper up a rope to save Sadie, but Pete disconnects the rope, causing Oswald to fall onto a board that launches some bricks into the air on top of him. Ever persistent, Oswald finds another route, tying himself to one end of a rope and pulling the other end through a pulley, making his way up. 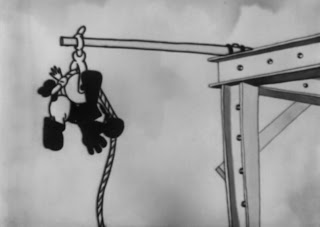 Of course, a fight ensues, with Pete menacing the smaller Oswald. There’s a great sequence here where they end up on a girder, dangling over the street. After a few rounds, the camera position switches to straight on looking at Pete, who punches at Oswald… 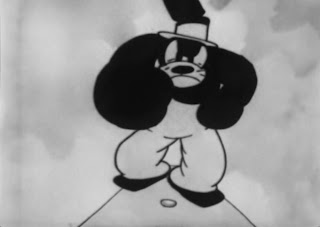 …then the camera blacks out and the action goes to straight on looking at Oswald falling back from the punch. It’s a very neat trick, although probably not too difficult to do. It just shows the Disney animators attempting to stretch their boundaries a bit and make things more interesting. 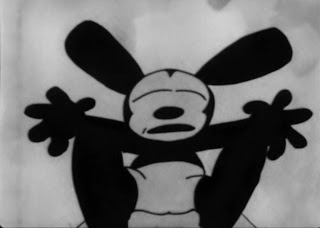 Oswald manages to duck one of Pete’s blows, and sends him careening toward the ground. He then picks up Sadie and manages to get a happy ending after all, as they smooch on the girder.

Like I said, Sky Scrappers isn’t nearly the short that Oh What A Knight was, but that’s not to say that it is not good. The consistent quality of the Oswalds in all perspectives – design, humor, storytelling, animation – is a striking departure from the Alice Comedies. There is a “house style” developing here that was not present before. So far, that’s my big take away from the Oswald shorts.
All images copyright Disney. All rights reserved.
Posted by Ryan at 12:52 PM