Oh What A Knight

First of all today, if you’re not reading the comments, then you’re missing out on the entire experience here. I approach my reviews from a novice perspective, because I have not studied animation like many others on the web, and I evaluate each short on two criteria, how entertaining it is and what it tells me about the style/life of Walt Disney.

However, if you want the deeper perspective and stories about the lost footage, names of characters and how things developed, read the comments from my faithful readers. Thanks to all of you commenters for your help in making this what I had imagined it to be – a community of fans enjoying the Disney cartoons and films together.

Now, on to Oh What a Knight, which, I have to say, is my favorite of the Oswalds so far. It is definitely the funniest of the shorts I have seen. The gags are a mile a minute, but they’re also contextual to the story, which is a new level for these shorts. 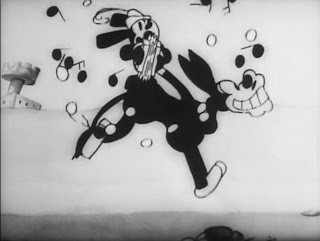 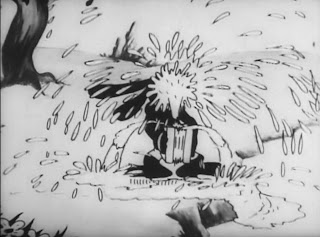 He manages to get up to the tower and plant a big, hot kiss on Sadie, which wins her over. It’s too late, though, as Pete shows up behind her, ready to clobber Oswald. 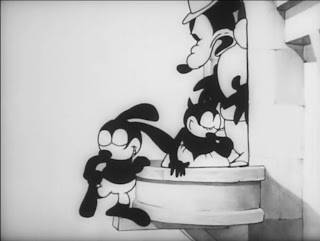 After a fun gag where Oswald falls off the tower and uses the entire screen as a “pool” to swim around to the top again, they clash inside. This is the funniest sequence of the shorts. Oswald doesn’t fight continuously, but manages to temporarily incapacitate Pete, run over to kiss Sadie, and then repeats the cycle. One memorable instance involves him allowing his shadow to swordfight while he runs over to Sadie. He pulls this trick 4 or 5 times, and each time it gets funnier. It is a classic comedic situation with great timing and inventive animation. 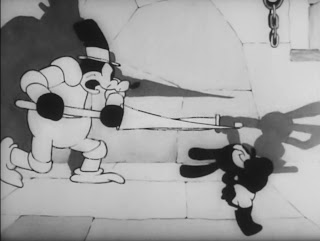 Oswald manages to use his wits to knock over Pete and his knight minions like bowling pins. He and Sadie open the door to get outside, and a lion jumps out, chasing them out the window. In another clever bit, Sadie’s dress inflates, and Oswald hops on top, as they kiss away the short. It’s clever because rather than falling straight down, they flow from side to side, up and down, and the animation reflects it. Very good work by the animators here. 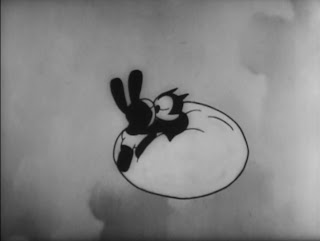 I loved this short. It is stuff like this that almost makes me wonder if Mickey was the beneficiary of sound more than quality. I’ve seen Steamboat Willie many times, and it’s good, but it’s not as good as Oh What A Knight. Not even close. I’ve read that theory before, but I wasn’t sure if I believed it. This is the first time I’ve thought that maybe there is something to that notion. What do you guys think?
All images copyright Disney. All rights reserved.
Posted by Ryan at 5:07 PM