Alright, so we know that Walt and his remaining crew had to work in secrecy to create the first Mickey Mouse cartoon, Plane Crazy. For the most part, while the rest of the studio finished the remaining Oswalds, Ub Iwerks worked behind closed doors creating the debut of the Disney Studio’s newest character. It is, without a doubt, one of the most amazing animation achievements I have ever seen.

Not to say that Plane Crazy is perfect, but when watching it, you are drawn into the characters, their situation, and what is going on in Mickey’s head, which is truly amazing considering that most of the short was done by one man. Even the title card acknowledges it, listing the short as “A Walt Disney Comic – by Ub Iwerks.” That singling out of one man as the key animator is something that you would not expect from Disney, but it was vital here. 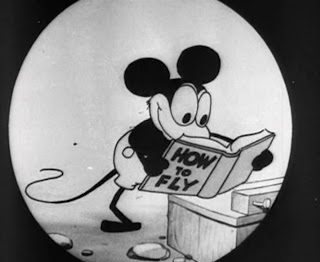 This time around, I watched Plane Crazy with the sound down, so that I could see it the way it was originally animated, without a soundtrack. I will revisit it again with the soundtrack to see the differences, but I think I can honestly say that the entertainment value could not increase.

The story is simple – Mickey Mouse admires Charles Lindbergh, and decides to get in his own plane and take a flight. The animals of the barnyard try to help him out by creating a plane, but that one doesn’t get off the ground. He creates a second plane out of a beat up car, and manages to get Minnie up in the air with him. Of course, as in any good Disney story, something goes horribly wrong, and the plane comes crashing to the ground. 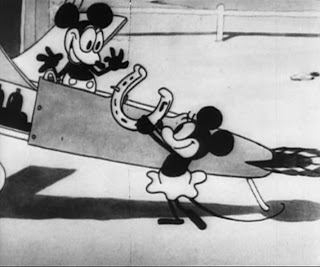 The real thing to marvel at here, though, is not just that this short was done almost entirely by one man, but that there are no shortcuts. The backgrounds are more detailed than the Oswalds, the characters have more fluid motion, and the point of view changes frequently. 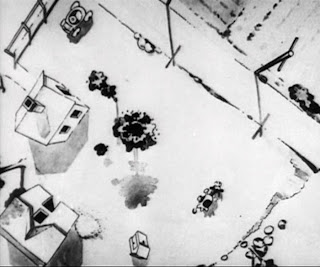 No review of Mickey’s first appearance would be complete without talking about the character design. He is obviously different from the current rounded, smiling mouse we know as the corporate symbol. Mickey in Plane Crazy is a spindly limbed mouse with a fat oval body and circular head. It’s a very different idea from the design of Oswald or even Julius, who each had thick limbs and a rounded feel. 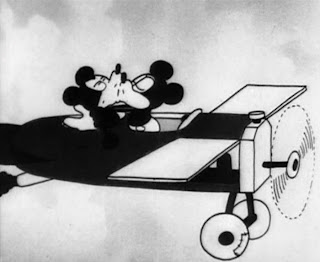 Mickey here is also more of the adventurer and the mischievous soul than he would become later. While up in the plane, he forces a kiss on Minnie, which prompts her to jump out of the plane. What’s great is that simply by looking at him, you can see the mischief in his thoughts, which is more of the great personality animation that Disney is famous for. All in all, an extremely successful debut short for Walt Disney’s most popular character.

All images copyright Disney. All rights reserved.
Posted by Ryan at 3:57 PM