The shorts of 1943 end with a story that could be read in multiple ways. Chicken Little is a classic tale, but read in the larger context of World War II, this short shows a little bit of satire and political commentary. It’s not something you’d expect from Disney, who most people think of staying away from politics, but it’s definitely a part of Chicken Little. 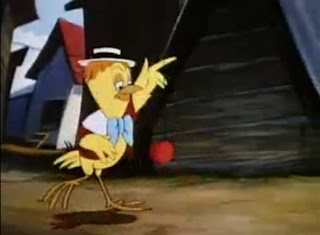 If you’re familiar with the story of Chicken Little, you will understand the premise of the short. In the original stories, an acorn falls on the chicken’s head, and the chicken decides that the sky is falling, and whips the other birds into a hysteria. There are a couple of endings in traditional tellings – in the first, the chicken narrowly escapes, and in the second, an unscrupulous fox eats all the birds. 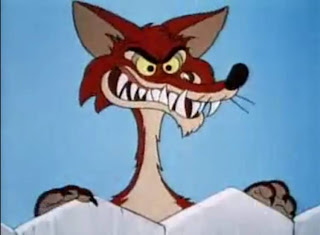 For this short, Disney took a different, but much more relevant tilt to the story. Here, it’s the fox who stirs up the trouble, looking to capitalize on the fear to eat the chickens. He preys on the weakest of the bunch, Chicken Little, trying to make him believe the sky is falling. The resulting panic that Chicken Little drums up drives all the chickens into the fox’s cave. 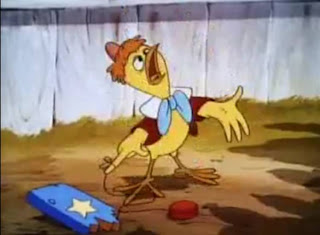 The simple twists here are the ones that give this short its political punch. The fox, of course, represents Hitler and the Nazis, and the chickens are the German people. By inciting the hysteria, the fox gets his goal of driving the chickens out of the safety of their fenced in yard. I giggled at the ingenious way he starts the action, hovering over the fence with a psychology book, and identifying Chicken Little as the “stupid one.” 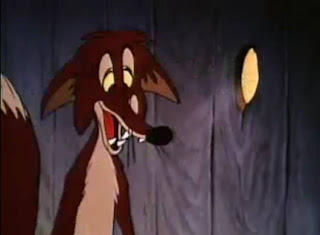 Seeing the fox play the birds against one another is a nice study in character animation, as he starts the whispering campaign that convinces them that Chicken Little is correct. Since most of the whispering is the fox, we get to see the reactions of the other birds bit by bit, and every single one is perfect. The animators manage to capture the irrational fear but also the slight pleasure in seeing another person upended, in this case the mayor of the coop. 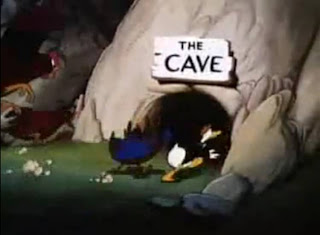 The underpinnings of the short are easy to read, especially when the short ends and the chickens are driven into the fox’s cave. While the narrator assures us that everything will turn out alright, once the shot goes to the inside of the cave, we see that the fox has eaten all the chickens. It’s a definite commentary on what was happening in Germany, projecting that Hitler had led the Germans to doom, only to enhance his own reputation. While it’s odd today to see Disney wading into this sort of material, even subtlely, it’s a sign of how entrenched the entire country was in the war effort during those years.