So far in the wartime shorts, we have seen quite a bit of military and foreign action. Donald has gone off and joined the Army, and we have seen how he has gotten into trouble with Pete. We’ve seen the propaganda shorts bashing Hitler and Germany. But there has been only one that dealt with the homefront – Victory Vehicles. Now, you can add Home Defense to that list. 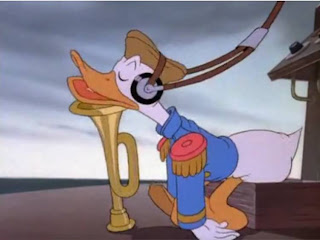 Home Defense adds a dimension to the war at home that we have not seen so far – that of the watch commander or listening post. During World War II, there were citizens who would listen for attacks that might be coming. In this short, Donald Duck is one of those citizens, with the able assistance of his nephews, Huey, Dewey and Louie. 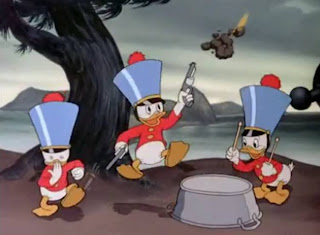 This short follows in the best traditions of Donald and his nephews cartoons, with the boys causing mischief for Donald, followed by Donald overreacting. Any good Donald short features Donald losing his mind, so this one is no different. In this case, however, it’s poking gentle fun at the listening post idea, and at the war itself.

Donald is spending his time at this listening post with the boys, when he accidentally awakens them. To get him back, the boys launch a toy plane and stuff it with cutout soldiers with parachutes. Donald reacts as though it’s real, and pulls out the guns to shoot the plane down and release the parachuters. 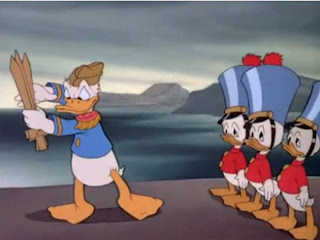 Then, when the ruse is discovered, Donald strips the boys of their rank and casts them off. This bit is very nicely done, as it foreshadows the end of the short. That is one thing that was missing from previous 1943 efforts, is the story consistency we saw in some of the earlier Disney efforts, especially Donald Duck cartoons.

The inevitable resolution here is that Donald needs the boys to deal with a real crisis, right? Instead, the comedic choice is to get Donald all worked up about another false threat, in this case a bee. The bee manages to get into Donald’s listening apparatus, which causes the duck to imagine all sorts of doomsday scenarios. 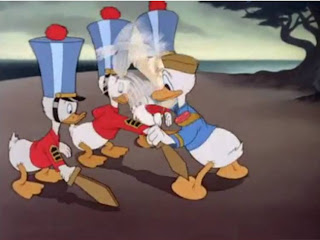 Frantic animation of the highest quality follows, as the boys are recalled, Donald sews their badges back on and in the end, a cannon is fired into Donald’s listening equipment. This climactic part of the short is very well done, with quick bursts of movement and racheting up the tension until we get to the end, when everything blows up. 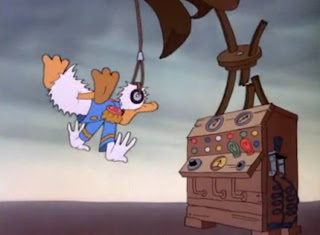 Home Defense is a funny short not only for that, but because of the subtle satire of making fun of the listening posts. There were definitely those in America who thought the listening posts were a waste of time, since the war was in Europe. This short took some of their criticisms and put them on display. Whether that was intentional or not, it makes for a good, funny Disney cartoon.