Now this is more like it! The Old Army Game pits Donald against Pete yet again, in the role of beleaguered Army private versus the angry Sergeant. It comes back to the humor and fun you would expect from a Disney short, with a coherent, tightly packed story that features some fantastic acting from the main characters. 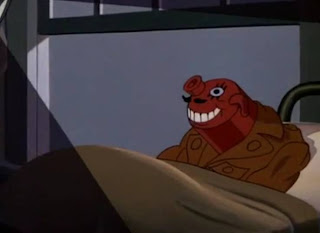 Donald is attempting to sneak back onto the base after breaking curfew for the night to go out on the town. Pete discovers this after going through the barracks and finding a bunch of “dummy” privates in the bed, complete with a pre-recorded snore soundtrack. Pete catches Donald coming back in, and hilarity ensues. 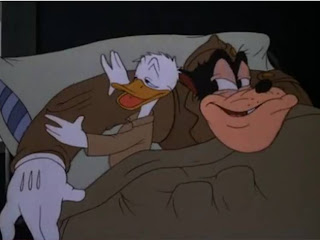 The title of the short comes from the version of the old shell game that Donald forces Pete to play once he escapes the barracks. Hiding under one of three boxes, Donald reaches out from the boxes to shuffle them around, hiding himself in the process. This sequence is truly hilarious. The viewer gets to play along with Pete, trying to locate Donald as the boxes shuffle around. 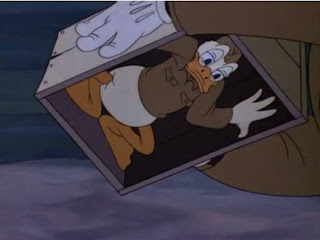 Where the short takes a turn to the darker side is when Pete throws aside the boxes and one of them gets cut up. When Donald is inside that box, it leads to a sequence of events that probably is the darkest in all of the Donald shorts, if not all of Disney animation. What do I mean? How about amputation and suicide?

Donald attempts to leave the box, and looks down only to see the bottom half of his body missing. He is scared and then shocked to discover this, and thinks that he no longer has legs. Pete wanders up and discovers the same thing, and they both break down into tears. If you watch the short and think that this is obviously a temporary thing, it’s quite funny. 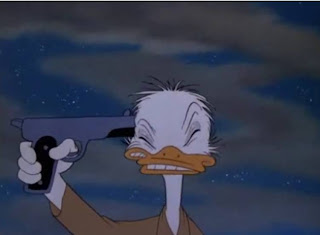 Where it gets less funny is when Donald decides that enough is enough, and steals Pete’s gun, choosing to shoot himself in the head. You read that right – Donald is about to commit suicide! Rather than stop him, Pete points him over to a bush to do it away from prying eyes. It’s so surreal to see Donald struggling with the gun, until he finally crawls away.

Of course, when Donald starts over towards the bush, it turns out that his legs were just embedded in the dirt. Pete sees this and the chase scene continues, but with a little twist. A sign outside the base tells them both that the speed limit is 35 miles an hour. It’s a commentary on the times, when motorists were being encouraged to conserve gas and drive slower. 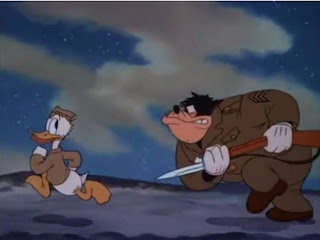 The Old Army Game has everything I’m looking for in a Disney short. Donald and Pete’s animation is fantastic, and the comedy in the short is pitch perfect. The whole missing legs and suicide sequence is actually quite funny, even as its also somewhat disturbing. This is definitely a short you will enjoy.