You thought we were done with 1943 shorts, didn’t you? Not so fast, my friend, as Lee Corso would say. In addition to the public shorts that Disney produced during this wartime period, there were the propaganda shorts that served to enhance the spirit of Americans about the war. At least that was the idea, and The Spirit of ’43 was designed for that purpose.

The specific subject here is income taxes. During the war, taxes were “high,” so that the government could produce the things needed to wage the war. That’s a point that gets touched on later in the short, but the opening uses the old trick of pitting man’s best nature against his worst, this time with Donald Duck as the person in between. 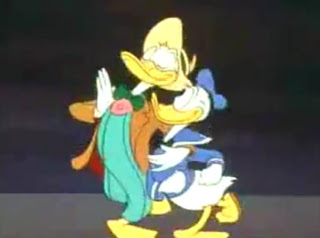 In this case, the good side is urging Donald to pay his taxes, put money away and support the war effort by making all his payments on time. On the bad side, the spendthrift duck is urging Donald to go to the nightclub and blow the money on entertainment. The good duck is represented by a character remarkably like Uncle Scrooge, which becomes quite odd. 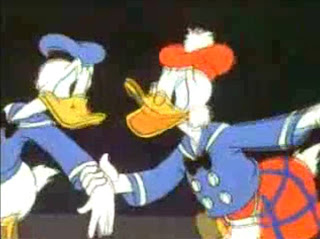 As the short progresses and Donald is trying to fight off the two sides, he ends up knocking them off. The good side slams into a wall, and reveals an American looking façade. Again, just odd because he’s represented by a Scottish speaking duck in a kilt! 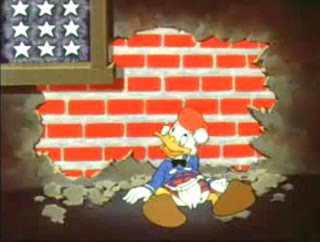 The bad side spendthrift duck staggers off the side of the club, revealing his Hitler mustache. The club doors form a swastika, and we see the clear message that blowing your money instead of paying taxes is supporting the Axis. 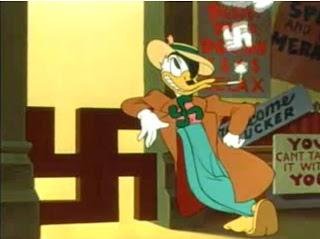 Take a second to think about that – would you see such a thing today? Encouraging people to pay their taxes, because it’s their patriotic duty? I don’t think so. It’s an amazing study of sociology to see how much attitudes have changed in the intervening 60 plus years to think of how unacceptable this short would be today.

At the time, however, with everyone united around the war effort, The Spirit of ’43 was an acceptable thing. The second half of the short is a rehash of other wartime shorts, showing all the guns, tanks and other machinery that can be produced if you pay your taxes. It’s well done, but nothing new. It’s the ducks that are so interesting here, and well worth watching just to see how things have changed.