The multiple Goofys conundrum is getting a little out of hand. Californy Er Bust is the latest example of this. In this Western frontier themed short, Goofy plays the cowboys and the Indians. Just doesn’t seem right, does it? 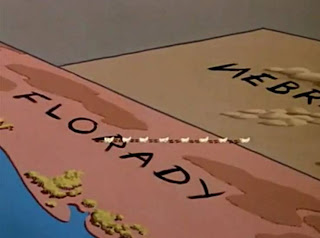 Aside from that, there’s not much to quibble with in Californy Er Bust, unless you are a fan of grammar, spelling or geography. The short plays off the ignorant backwoods stereotype, but never in a mean or hurtful way. I can see if American Indians were upset at their portrayal in the short, as it is not always favorable. While I can understand if people are upset by this, it’s not that bad in the context of 1945. 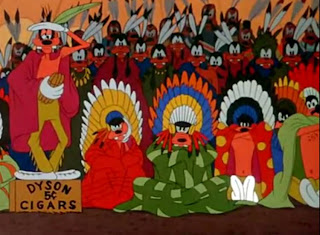 If you hang loose and go with it, it’s actually quite funny. The Indians communicate primarily in the word “Ugh” which is so simplistic it’s amusing. When a large gathering of Indians convenes, we get jokes on the Indian names, including the inclusion of a Cleveland Indian. The Indians communicating amongst themselves is one of the highlights of the short. 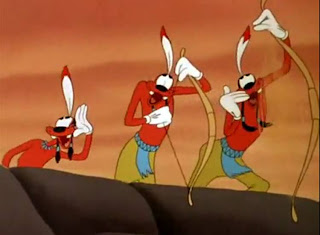 Apart from that, the “ignorant” nature of the settlers is the other great gag. The short opens with a shot of the wagon train rolling across “Nebrasky” and directly into “Floridy.” Later we see them huddled up in a wagon train circle with their pants falling off as they shoot at the attacking Indians. 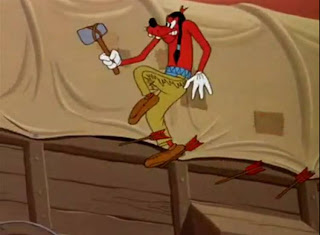 The interesting contortions of the Indians as they attack are a sight to behold. We see them go from vicious, bloodthirsty savages to a band playing music on their bows and arrows in mere seconds. Then there are physical contortions, such as one Indian who slithers among the rocks then climbs the wagon train on a ladder of arrows. 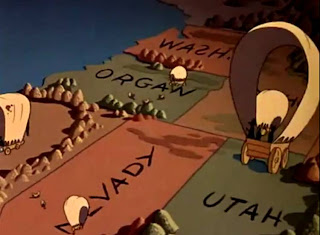 This is a short where you just have to let go and have a little fun. It falls into the traditions of tall tales and wild stories of the West. There’s an emphasis on gags and inventive humor in this short that was lacking from some of the previous efforts in 1945. say it’s a job well done by the Disney crew.