The Eyes Have It

I talked the other day about how fun it was to see Donald Duck angry. It’s what I’ve come to expect from a Donald short. The Eyes Have It does not feature this aspect of Donald, and it suffers for that. Fortunately, there is enough fun in the short to make up for a lackluster Donald. While this has been labeled a Donald short, Pluto really steals the show in this one. Pluto is convinced by Donald to act like different animals, because of Donald’s hypnosis glasses. Seeing Donald put the whammy on Pluto is quite funny. 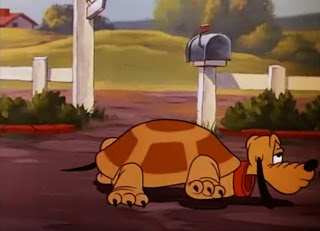 The animation of Pluto as the different animals makes the short fun. He starts off as a mouse, with his ears curling up to make “mouse ears” and sniffing around the floor. The work of the animators to take Pluto’s familiar form and still make it into something that is recognizable as a mouse is very inventive. Not just the physical characteristics, but the movements and attitude match as well. 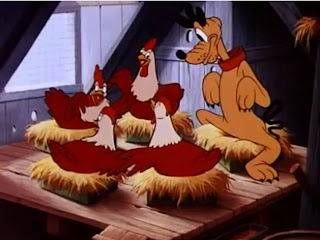 A highlight of the entire short is when Donald turns Pluto into a chicken. Pluto takes to the henhouse with no difficulty, sitting and gabbing with the girls. The mere sight of Pluto sitting in a nest with the other hens is hilarious. It’s a definite improvement over the turtle that occurs right before that. The ending comes with Pluto turned into a lion right as he’s about to face off with a rooster. It backfires on Donald, of course, as Pluto chases him throughout the yard and the house. Pluto thinking he’s a lion leads to a lot of destruction, reminiscent of the old Mickey and Pluto short where Pluto would destroy everything in the end by chasing a cat. 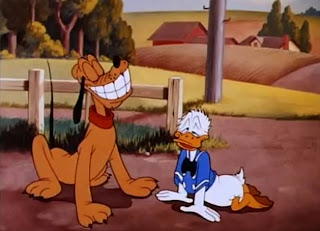 I think that’s the biggest issue with this short – it feels more like something that should be a Mickey and Pluto short, not a Donald Duck cartoon. At the time, Donald was more popular than Mickey, but from a story standpoint, it would have made more sense to have the main mouse. Still, just the animation work of seeing Pluto morph into different forms makes The Eyes Have It worth watching.