Alright, I am back! And what better way to return to regular blogging than with Donald Duck being angry. It’s like warm comfort food. Seeing Donald at his angriest is like seeing sunshine on Opening Day for baseball…it just makes you feel that all is right with the world. 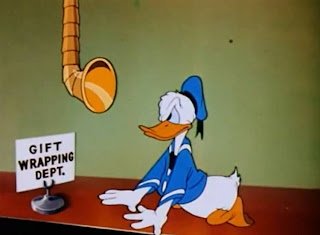 In this case, it’s Donald as a gift wrapper in The Clock Watcher. You really don’t have to say much more than that to realize that this is going to be good stuff. Donald works well in these “everyman” situations, where he can express the frustrations we all have in our jobs. Donald releases his anger, where the rest of us make quiet grumbling noises and let it go. 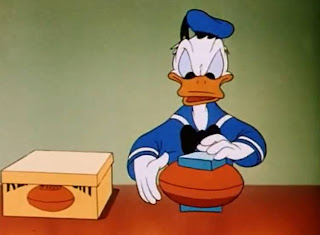 Adding to the fun this time is a device that was used with Donald in Der Fuehrer’s Face, the World War II era cartoon. In that short, a speaker tube was pointed at Donald while he worked on an assembly line, barking orders from the Fuehrer. This time, it’s the same idea, but the orders are coming from the corporate overlords at Royal Brothers, asking him to work harder. 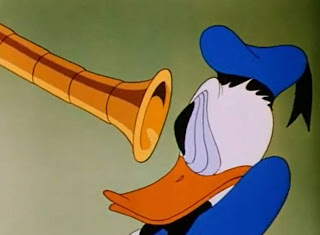 Donald is far from the model employee, as you’d imagine. His wrapping techniques consist of mashing things until they fit in the boxes, no matter if they break or not. Needless to say he’s not the most dutiful employee, either. Multiple times during the short he tries to take a break and eat a huge spread. Considering it’s a 7 minute short, that’s a pretty impressive display of loafing. 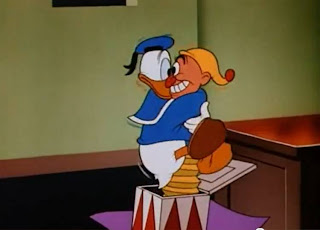 There’s some fun diversions here, such as Donald tangling with a jack-in-the-box. Unlike other shorts, the jack in the box doesn’t take on the characteristics of a human to fight with Donald. Instead, it is Donald’s own actions that cause the issues. It’s a fun moment when Donald ends up in the toy’s clothes. 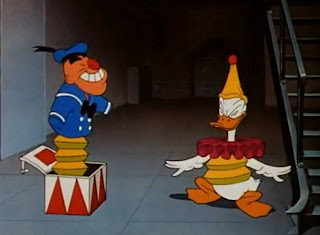 Having had to be away from the blog for so long, The Clock Watcher was a great way to slip back into the swing of things. It’s a classic Donald Duck short, with Donald the way he was meant to be.