The story here is simple, there’s a fire and Alice and her fire fighters are called in to put it out. But that is what is so significant. Unlike some of the previous shorts, where we would spend 1-2 minutes in a dance party, 1-2 minutes in a chase sequence and attempt to bridge the gap between them with a shaky story foundation, the fire fighting is the story, and all the gags fall under that umbrella. 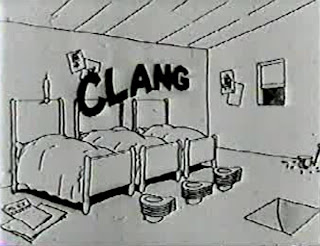 This is something that is very prevalent in the later Mickey Mouse shorts. Mickey and some companion, be it Pluto, Goofy or Donald or a combination of the three, are wrapped up in a task (window washing, ghost hunting, etc.) and the short involves the gags that each character gets wrapped up in. Alice the Fire Fighter is the first time I have really seen that sort of storytelling used with the Alice shorts. 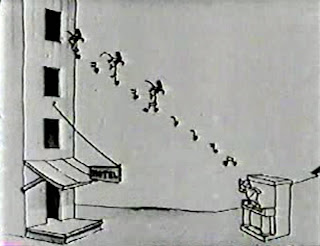 The short opens with the fire in a nearby hotel, and a mouse runs out to ring the bell. The Clang of the bell awakens a succession of Julius clones, who mobilize to the fire with Alice leading the way. Back at the hotel, there are some fun gags, like the dog piano player playing notes to let the rats run down them to safety. 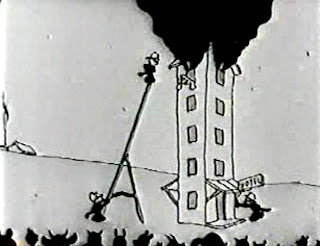 One of the Julii (is that the correct plural of Julius?) can’t reach the dog in the top window, so one of his brethren pushes the hotel closer. Others try to rescue a black and white dog trapped on the top floor, who jumps towards a safety net, misses and bounces off the ground onto the net. 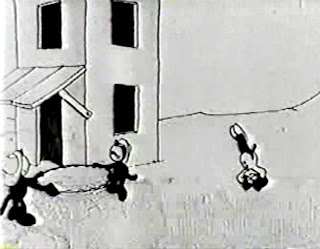 The final sequence involves a female cat stuck in the seemingly huge top room of the building. One of the Julius clones tries to climb the spout to rescue her, but falls down. He eventually gets the idea to use the fire engine, and climb on top of the cloud of smoke being put out and ride it to the top. Both he and the female cat escape, make it to the ground and fall into each other’s arms. 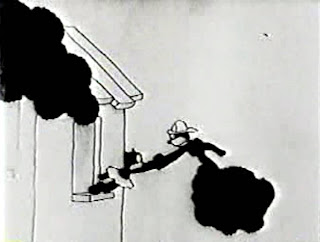 As I said, it’s simple, but it seems to be showing us a preview of the format of Mickey cartoons to come. I’ll be interested to see if this pattern picks up in the Oswalds, since there are so few Alices left to review. Is the pattern of a task providing the story umbrella something that continues? I’ll have to wait and see.
Posted by Ryan at 5:45 PM