Alice on the Farm

As we begin 1926 in our review of the Disney films, it’s interesting to note what is going on behind the scenes during this timeframe. The year of 1925 was the most successful yet for the studio, as they released 15 Alice shorts, fully integrated Ub Iwerks into the team, cut costs by replacing Virginia Davis with Margie Gay, and signed a new contract for 18 Alice films with Margaret Winkler.

Because of this success, Walt and Roy felt it was okay to start looking at expansion. The Kingswell Avenue storefront where they had begun the Disney Brothers Studio was not sufficient to hold all the animators anymore, so they found a new place on Hyperion Avenue, where the studio would flourish until the proceeds from Snow White allowed the construction of the new Walt Disney Studios in Burbank.

So, you can see that late 1925 and early 1926 was a busy time for the brothers. That is not to excuse the seeming repetition of gags that pops up in today’s short, Alice on the Farm, but you can understand why the focus was less on innovation at this time, and more on churning out the product.

Alice on the Farm is really a recycling of old gags, wrapped in a farm setting as opposed to some of the more exotic settings of earlier shorts. The opening of the short features a cow eating nearby flowers. Yep, it’s that exciting. The gags begin when one of the flowers starts moving, causing the cow to chase the flower up a tree to eat it. 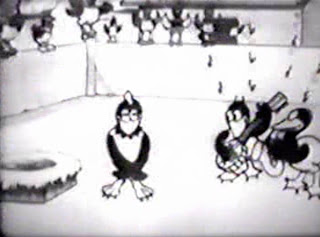 Then we see the chicken house, where the chickens are partying in much the same manner that we have seen rats and other barnyard animals doing throughout the Alice shorts. Nearby, Alice instructs Julius to go and perform some chores.

For some reason, this causes Julius to go and get a dachshund out of its house, and he and the dog walk off towards the chores. At some point, though, the dog gets fleas, and Julius rigs up a rake to the dog’s tail to help it scratch. With that, the dog disappears. 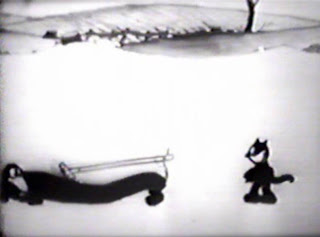 This leads to a neat gag, where Julius forms his tail into a radio antenna, to communicate with the cow, that is still up in a tree. The cow also makes his tail into an antenna, and the two agree to meet, where we find out that Julius is to milk the cow. For some reason, though, it doesn’t work, until Julius finds a vacuum cleaner that he hooks up to the cow’s udder to suck the milk out. Don’t try this at home, kids. 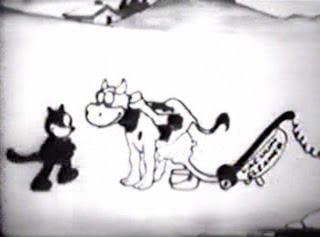 About that time, Pete happens across Alice, and kidnaps her. In a repeat gag, Alice’s scream of help flies to Julius and drops on his head. At this point, the rest of the short unfolds in similar fashion to others. Julius puts a horse together from a sawhorse by stuffing a dog in one end. The horse even begins running backwards and Julius switches the head and tail, like he did in Alice Wins the Derby. 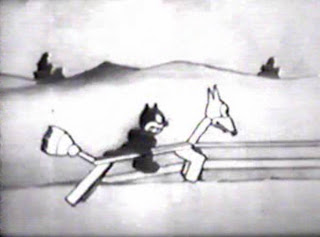 When he reaches Pete’s cabin, Julius bursts in, and sword fights the villain with his tail, before the tail loses its stiffness. After dipping the tail in a nearby bucket of starch, Julius has an idea, and dumps the starch on Pete, causing him to harden up like concrete. Julius punches him into a million pieces and accepts the thanks from Alice. 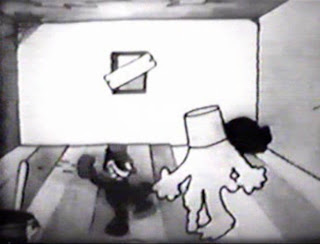 This short is entertaining, no doubt, but it’s nowhere near original. Most of the gags are recycled from other shorts. The use of Julius’ tail as a sword has been in many of the shorts, just like the words hitting people over the head. I mentioned the repeat from Alice Wins the Derby, and the dancing chickens, but there are many more. It really seems as though this short, like Alice in the Jungle, was cobbled together from ideas for other shorts, then put out as a way to get product out. We’ll have to wait and see if this approach changes as we move forward into 1926.
Posted by Ryan at 1:46 PM