Alice in the Wooly West

We’re now getting to the point of the Alice Comedies where relatively few of the films have actually survived. To be honest, I have not been looking ahead at the Alice shorts, because I knew that not all of them were still around, but its startling to note how few are left. Today’s short, Alice in the Wooly West, is the only remaining one from 1926, and I have only one other left, from 1927.

To go on a mini-rant here – it’s a shame that these films no longer exist. As we’ve seen, there are big changes from 1926 to 1926 in the animation that is done by the Disney Studio. To be missing nearly an entire year plus of work on the Alice series and only have the Oswalds from 1927 is missing a big chunk of the development that takes place.

Regardless, after the horrors of war in Alice’s Little Parade and the bleak sausage making of Alice’s Mysterious Mystery, Alice in the Wooly West is a welcome return to form for the Disney animators. This short features more of the familiar gags and plotlines that you would expect from the previous Alice shorts. 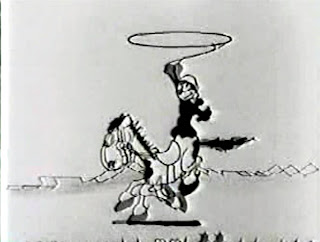 The short opens with Julius as a rip roarin’ cowboy, involving his horse in several rope twirling gags. Shortly, though, we focus on Pete and his mouse gang, who are menacing a stagecoach. They shoot the wheels off the coach, which sprouts legs and runs away, slamming into a tree. The mice surround it and menace the passengers. 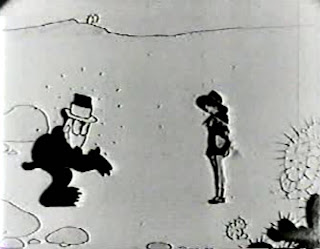 Julius notes this, and comes storming to the rescue. He’s at the top of a cliff above the melee, though, so he surfs down on the horse’s belly, before launching into a shooting escapade with his guns. Despite having six shooters, Julius lets off what seems like a hundred different shots in a nifty animated sequence. 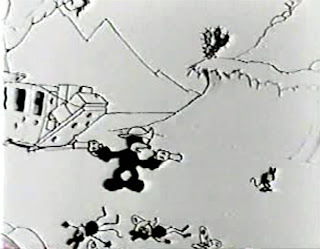 However, Pete gets away, grabbing Alice in the process. Julius chases, confronting Pete on top of a cliff. They fight there for a minute or so, before tumbling to the bottom. 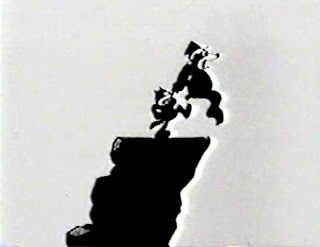 At the bottom of the cliff, the two fall into a pile of rocks, which leads to a neat comic sequence of each one popping up behind different rocks. When Pete pops up, Julius pops up elsewhere, and they trade rocks, swap positions and eventually end up far apart. Julius comes up with an idea, though. He removes his skin, then sends the suddenly lifelike skin out to decoy Pete, then sneaks up behind him and cracks Pete on the head. 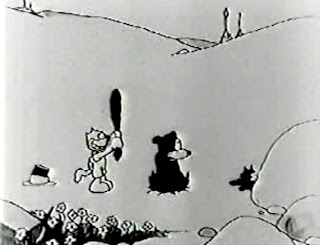 Julius puts on his skin as Alice greets him as “My Hero” when the short ends. It’s definitely a sea change from the things we saw in the last two shorts. There were two shorts produced between those and this one, though, that have not survived. So, the question is did Walt rein in some of the outlandish stuff that took place in the previous shorts, or is it simply a case of different animators leading the efforts? There is not enough evidence to say either way, as these early years were not heavily documented.

My guess would be a little of both. I would say that Walt rode shotgun more on some films than others, and indulged Ub’s flights of fancy sometimes and not others. That would explain the inconsistency of the shorts and the widely varying subject matters. I’d have to dig deeper into the later work of Harman, Ising and others to see if some of these same themes pop up more, but I know from some of my commenters (thanks, guys) that those two in particular repeated some of their Alice gags and subject matter in later work.
Posted by Ryan at 4:12 PM