So today we end the Alice Comedies, at least on this site, but fear not my friends, we will move forward into a new world of Oswald the Lucky Rabbit, not with trepidation, but with courage. Or, with a DVD player. Something like that.

Speaking of new, I neglected to mention in my Alice’s Circus Daze review that we have a new Alice. Lois Hardwick took over the role beginning with Circus Daze and lasted the remainder of the series unless I’m mistaken. Of all of them, Hardwick is probably the best actress of the bunch, but she gets very little screen time, because at this point, Walt and his animators had lost interest in the live action parts of the shorts, and were focusing almost exclusively on the animation.

Alice the Whaler starts like all good Alice shorts do, with the patented Alice dance party. The deck of Alice’s whaling ship is alive with her dance as well as the dance of her animal friends. It’s a cross species dance-a-palooza. 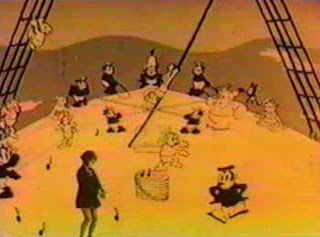 The main story of the short, though, is very lacking. The main focus seems to be on a mouse character, who gets orders from a grumpy cook. The mouse fights off some dishes that end up crashing on his head from the bumpy waves. Then, the cook orders him to go and get some eggs. 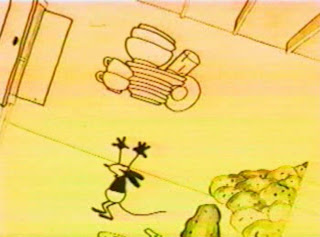 The mouse decides that in order to get eggs, he needs to lasso a bird from the mast of the ship, so he does so. Finally getting eggs, the cook asks for milk, which the mouse gets from a goat on deck, which moves back and forth with the waves. None of this is really all that appealing visually, and it’s not very entertaining. 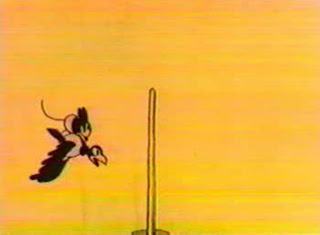 What it does do though, is offer a glimpse at what was to come. The mouse is not the Mickey-esque design we saw in the 1926 shorts, but instead has long ears like a rabbit, and is more reminiscent of Oswald than Mickey.

We do see our erstwhile friend Julius, however briefly, as he climbs the lookout and spots a whale in the distance. This is his five seconds of screen time for the short, which is sad for a character that has been so central to the series. 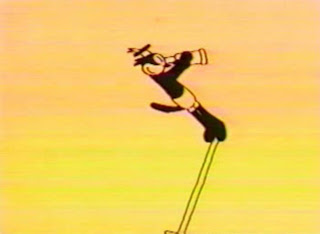 The finale of the series comes when a monkey first mate shoots a harpoon into the whale that Julius spotted, and the whale drags the boat over the waves. As far as story goes, it’s terrible. There’s no real flow to the story, no conflict or resolution of any kind. 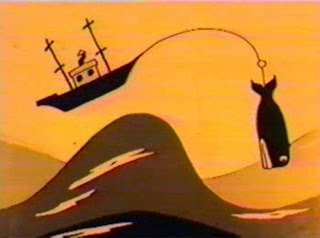 The animation is…well, that’s the thing. I’ve seen reviews of this short on Disneyshorts.org, and people there claim that it’s a step up from the earlier shorts. Certainly the backdrops are better, the characters are more fluid. But as far as visual appeal, I do not think the stick and hose animation is very good. It does not portray the full personality the way that I thought some of the earlier shorts did. Just my opinion, but having watched all these films in a row, this stands out as “different,” for better or worse.

So, that brings our Alice viewing to an end, unless I can get the Netherlands to send me copies of some of the missing shorts. Don’t think I’m not trying. Next up is Oswald the Lucky Rabbit, and the evolution of the Disney animation continues.
Posted by Ryan at 3:38 PM