Alice’s Little Parade is neither a little short, nor about a parade. Discuss.

Okay, now that we have today’s Coffee Talk joke out of the way, we can discuss the latest in the Alice films. Alice’s Little Parade shows great improvement to my untrained eye. It seems like a better example of storytelling and gag animation than previous shorts, continuing the progression from Alice’s Balloon Race and Alice’s Orphan.

The subject matter is a bit startling, actually, considering the times in which it was produced. The idea is that Alice and Julius are going to war with Pete and his army of mice, so the short opens with Julius trying to recruit friends to their cause. This leads to a cute gag with Julius pulling down the top of a house where an old man can’t hear him, so Julius can literally shove the words “War is declared” in the man’s earpiece. 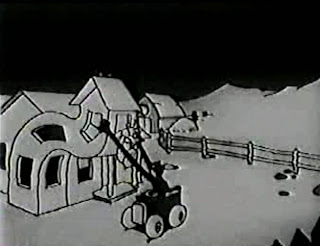 But remember what was going on in 1926. It was the Roaring 20’s, but much of the country was still recovering from American involvement in World War I. There was much debate as to whether the US should ever involve itself in such a war again. It was somewhat of a war weary nation, so to produce a short with such a military bent is confusing to me.

However, the short goes full bore with its war imagery. Julius leads a parade of animals through the recruiting station, where they emerge on the other side in uniform and armed to go to battle. 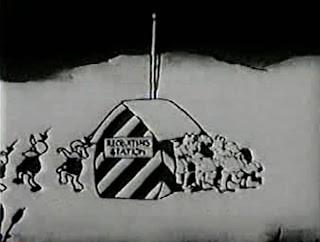 Of course, the battle ensues, with Pete leading a battalion of Mickey-esque mice to fire cannons at Alice and her troops. There are some cute gags here, with the mice losing their cannon and hiring a donkey to kick the cannonballs at the opposition being one highlight. But there are more - Alice gets knocked down by a cannonball, Julius uses a stove as armor – all of which are better than what was seen only a few shorts back. 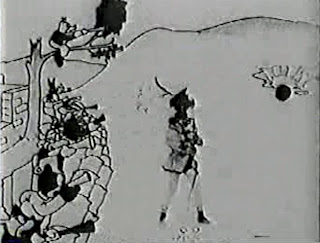 One of my favorites was seeing Julius get hit by a cannonball, and shattering to pieces. He is gathered up by a medic, then taken to the hospital, where a doctor reassembles him from the pieces and “spare parts” on the shelf. It’s an amusing sequence that stands out in this film. 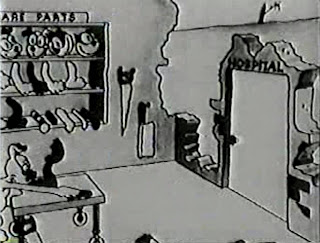 Reassembled, Julius devises a plan. He places a piece of strong cheese at the entrance of a crevice, then uses a fan to blow the scent to the mice. He removes his tail and bashes each of them on the head, in a similar fashion to the fish back in Alice’s Day at Sea. 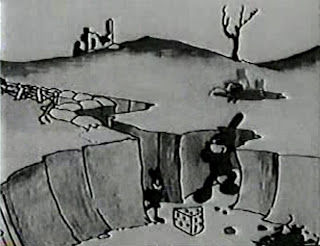 Of course, after eliminating the mice, Pete comes to call, but Julius is prepared. He gets Pete to chase him into a cannon, then escapes and shoots the bad guy off into the ether.

So what does this short tell us? Not much if you are looking at Walt’s life. It is interesting that this short features warfare, because Walt was in the Ambulance Corps during WWI, so he saw the horrors of war up close. Is that why this is the first of the shorts to feature war? Was the hospital scene a take off on those years? Without more evidence, we’ll never know, but that’s probably the most interesting thing to note about this well done short.
Posted by Ryan at 2:20 PM