If you have ever been a parent or tried to take care of very young children, you will be able to relate to Alice’s Orphan. I’ve read reviews of this short that say that it is not good, or somehow a bit off center, but to me, this was a continued demonstration of how the Disney studio was starting to find it s way in story telling, similar to Alice’s Balloon Race.

Part of the reason for that is that at this time in 1926, the animators were beginning to do more storyboarding. This is a common practice today in all films and television, but at the time, it was not done for animation. Animators merely made up a story and started drawing, but the addition of the storyboard made for a more focused cartoon.

This short opens with Julius out ice skating, on an open pond with several other cats. He sees a female cat that he is stricken with, but she soon falls in a crack in the ice. Julius rescues her, assuming that he will be thanked and win her heart. But when she gets up, he sees that she is ugly, and in a bit of a mean turn, shoves her back in the ice and closes the hole. 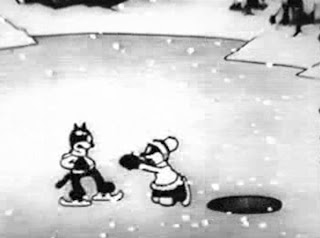 It’s a funny bit, but it’s contradictory to the rest of the short. That would be my only complaint about this cartoon. Soon after, a woman leaves a basket next to the ice, and Julius notices it. Turns out, it’s a baby cat, and Julius picks the baby up and decides to take it back to his cabin. 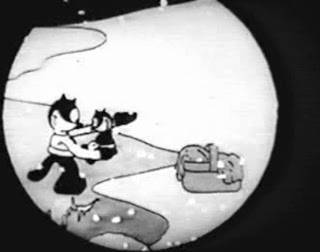 Alice makes her only appearance in the short as Julius enters the cabin to show her the baby, and they name the baby Oscar. Soon, Oscar does what babies do, and Julius has to change his diaper and give him a bath.

The bath sequence is inspired, especially if you’re a parent. Julius gets to do all the things that parents wish they could do. He runs Oscar up and down a washboard, strips his skin off, wrings him out like a towel, and finally pours ink down his throat to give Oscar the black coloring back. It’s funny, brutal and endearing all at the same time. 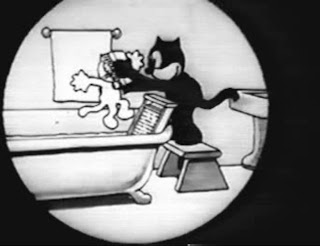 Next, it’s time for dinner, and Oscar digs in with vigor. He starts shoveling food in with his hands, prompting a rebuke from Julius. In a cute gag, he yells “Hey” and the word floating in the air redirects Oscar. 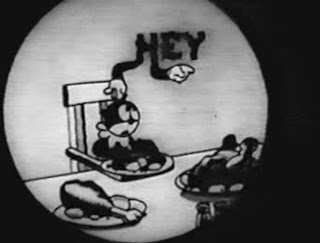 Not that it matters, as Oscar laughes at Julius’ proper manners, even throwing the turkey at his erstwhile father. That’s enough for Julius, who decides to send the kid off to bed. Again, this is a great sequence, as Julius tosses Oscar up in the air, dropping him into a set of pajamas, then throwing him in the bed. Like any kid, Oscar cries, until Julius begins rocking him and singing “Rock A Bye Baby.” After a couple of false starts, he gets Oscar to sleep and the short ends. 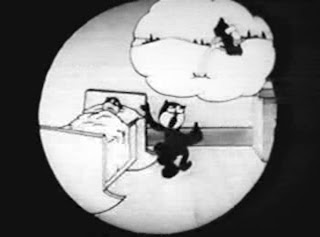 I have to say, the storytelling and the gags in this short are the best combination that I have seen in the last 10-12 Alice shorts. If I had to hazard a guess, I would say that this was when the storyboarding process began.

Another interesting thing to note is the diminished role of Alice. At least in the last short, she was part of the balloon race, but here, all she does is say hello to Oscar, then disappear. It’s clear that the animators and Walt are no longer interested in the live action parts of these shorts, but instead are focusing on improving the animation.
Posted by Ryan at 2:26 PM