Alright, so we have the first speed bump in the Oswald series with our fourth short, Great Guns. It’s not that it’s bad, but more that it’s a remake of Alice’s Little Parade, so it’s very unoriginal.

That said, Great Guns improves on Alice’s Little Parade by leaps and bounds. Even though the gags are recycled in some ways, there are some new inclusions that make this a much better effort. In Little Parade, Julius was the main character, and there was not much to his story, other than the gags of defeating the rats in the battle. Great Guns ties all the threads together by giving Oswald a romantic plot that runs throughout. 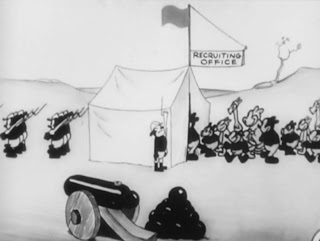 The story begins exactly the same as Little Parade, with a newsboy telling the world about an impending war, and the exact same gag of the animals parading into one end of the recruitment tent and then coming out the other side outfitted for war.

The new addition here is Oswald’s enlistment ending with a visit to his sweetie’s house. Ever the schemer, Oswald uses the war to get a little sympathy kissing in, as he gets his girl to wish him a hearty goodbye. 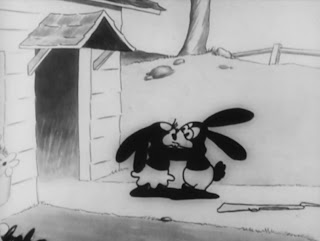 In fact, from the shot of the two of them kissing, the action fades to the exact same position of Oswald in the battlefield, kissing a picture of his girl. It’s a great effect that adds to the story very effectively. His rapture is short lived, however, as one of the rats he is fighting drops a bomb right through his girl’s picture, and Oswald takes to the air to battle the rat. 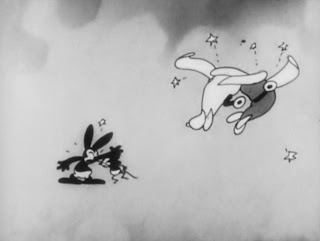 In a neat sequence, the planes become characters themselves, battling like boxers, while Oswald and the rat are thrown out and fight amongst themselves. Eventually the fight spills down to the ground, where Oswald pummels the poor rat. It’s a short lived triumph, though, as a superior officer that resembles Pete shows up to take on Oswald. 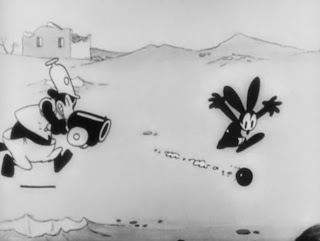 Oswald, in a nice bit of personality animation, pats the little rat on the head, and you can read the sheepishness on his face. It’s a nice step for the animation. After running away, Oswald fights back by loading cannonballs in an elephant and firing them, similar to Julius using a horse to kick the cannonballs in Little Parade.

Again, it’s a short lived success, as the cannonball from the enemy hits Oswald and shatters him to pieces, as we begin the same sequence we saw in Little Parade. A nurse comes on the battlefield, halts an oncoming cannonball and gathers the pieces up to take them to the hospital. Once inside, rather than the spare parts from Little Parade, the nurse puts the pieces in a cocktail shaker to reassemble them. 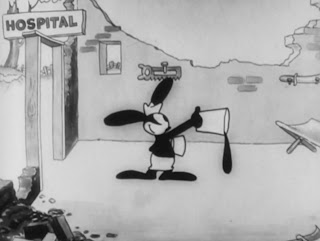 Once the nurse spills them out, we see that it’s Oswald, and the nurse turns out to be his best girl. They end the short kissing again as they did at the beginning.

The flowing narrative of Oswald and his girl are the main improvement in this short over Alice’s Little Parade. It gives the story more weight. Other than that, the gags are pretty much the same as Little Parade, so it’s hard to evaluate this short as anything other than a copy. Granted, it’s better than the original, but it’s disappointing to see the animators returning to the same subject only a year later than they tackled it the first time. I assume it’s a time issue, trying to get the stuff out, but it still feels like a letdown.
Posted by Ryan at 2:52 PM