Although not nearly as packed with gags as Alice the Jail Bird, today’s short – Alice’s Tin Pony – is still funny and entertaining. The storytelling was better in some of the previous shorts, but Alice’s Tin Pony continues the quality in animation that we saw in yesterday’s short.

The story is simple, as it generally is, but this one is particularly slim. Alice is running a railroad with Julius, much to his chagrin. 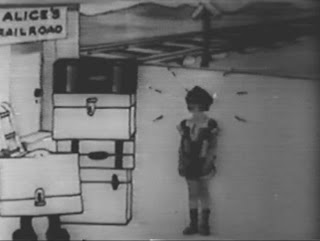 A large payroll is delivered to the railroad, catching the eye of one of Pete’s gang. My guess is he figured it out by the big sign on the case that said “Big Payroll” or by this sign on the door of the boxcar. 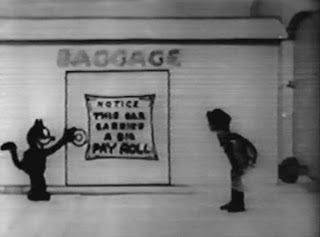 The railroad gets underway, as Pete’s henchman runs off to tell his boss. This leads to some fun gags with Julius and the train. First, there is the train giving a whistle by using it’s “hands” instead of its whistle. Then, Julius is shoveling coal, and when he gets hot and takes a break, the shovel continues. Then the shovel pops up with a face, sweating profusely, while Julius takes his “shirt” off, causing his “pants” to fall down. 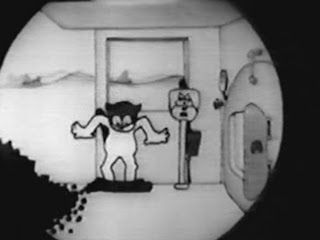 That sequence has a great finale with Julius getting singed by the fire and cooling his tail in the water car. But that’s just the halfway point of the short, as the henchman is on his way to Pete’s hideout still. There’s a party going on there, but Pete’s not in the party mood. A female mouse tries to cozy up to him, but he shoos her away. Then, a dancer bumps into him, and Pete shoots him. That leads to a funny gag as the dancer looks through the hole in his torso before dying. 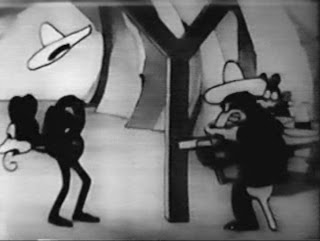 When Pete finally learns of the payroll train he hits the road, trying to derail it with a large rock. But the train just goes straight over the boulder, and keeps going. This is where things fall down a bit. The chase sequence is pretty weak, considering that every one of the Alice shorts seemingly has a chase sequence. It ends very quickly, with the train passing a bridge, and Julius using his tail to roll up the bridge to get away. 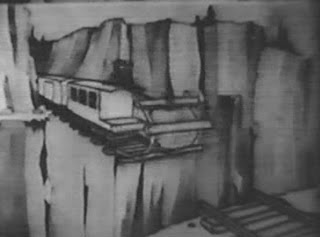 The weak ending and lack of a meaty story, though, does not keep this from being entertaining. The gags are not as mile-a-minute like they were in Alice the Jail Bird, but they are still inventive, not the straight ahead stuff that we saw in shorts like Alice Loses Out. The inconsistency in the shorts so far is one of the most intriguing things. What I want to look at sometime soon is what could have caused this. Is Walt busy at sometimes, and has less of a hand in what is going on? The arrival of Ub obviously did a lot to change things, but even since his arrival, there have been some duds. What is the difference?
Posted by Ryan at 3:20 PM