As 1926’s shorts roll along, I’m looking for signs of what is to come in the Oswald shorts and the Mickeys that will come later. I have not seen those cartoons before, except for a couple of the Mickeys, but I just want to see if there are familiar themes here that will be repeated later. Increasingly, though, what I’m seeing is that Julius is more like another cartoon character – Felix the Cat.

Alice’s Balloon Race is a good example of this. Where Julius started out as Alice’s companion who would do some fun gags here and there, in the later shorts, he increasingly dominates the screen, and pulls some of the same tricks that Felix does. Alice is merely a side character in her own short, and Julius and his Felix imitation take center stage.

This short has a fairly simple plot – Alice, Julius, Pete and some others are competing in a balloon race. Straightforward and easy to understand, right? 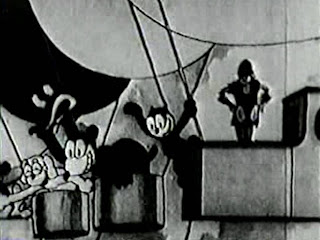 So, they begin the race, and of course, Pete cheats and knocks Alice and Julius out of the sky. After the crash landing, they can’t get their balloon back in the air, but Julius comes up with the idea of having a nearby hippo sneeze them back up. He pulls pepper out of nowhere (much like Felix and his magic bag) and forces the sneeze that propels them upward. 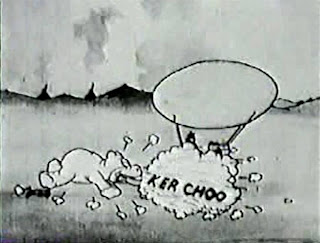 Once they are in the air, the balloon bounces around as bad weather sets in. Lightning terrorizes the balloon, separating the basket from the balloon, and creating a corkscrew effect that pops the balloon. 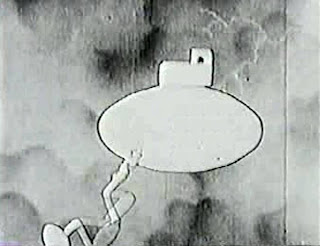 Once they hit the ground, Alice is done for the short, just over halfway through. Julius doesn’t give up, though, grabbing a dachshund, and attaching his thought balloons to either end. That doesn’t work, so after that crash, he inflates an elephant, after pulling a pump out of nowhere. As he gets up he grabs a bird and catches up to Pete. 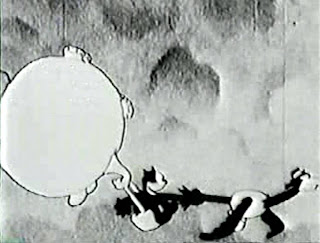 The final scene on my copy is a bit muddled, but lightning again threatens Julius, chasing him off of the elephant-balloon, but Julius hitches a ride on the lightning and gets back to the balloon as the short ends. 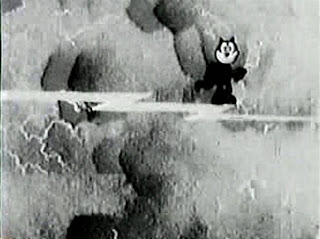 I’m assuming that my copy is missing the ending, but all in all, it’s not a bad short. There are some entertaining gags as well as a story that moves through the entire short. The lack of appearance by Alice is not bad, because she has not been a factor in most of the recent shorts anyway.

What really stands out is how much Julius is becoming a copy cat, no pun intended. His ability to pull tools out of nowhere is a direct copy of Felix, and he even looks more like Felix in this short than in others. This runs counter to everything you think when you look at Disney animation. I’ve always thought that Disney was the innovator, but at this point in his career, although Ub has created some memorable gags and is pushing the quality of the animation, the characters are largely derivative. That’s not a bad thing, but it’s very interesting to note, since the later characters would be so original.
Posted by Ryan at 4:08 PM