When The Cat's Away

Alright, I’m back after a week spent at Walt Disney World, reveling in the Disney magic. It was great, thanks for asking, and I was rejuvenated and excited to get back to work today. That’s why it was such a disappointment to watch the latest of our Mickey shorts, the 1929 short When The Cat’s Away.

It’s not that this isn’t an entertaining short. It is. But it’s not original, and it features no real story or character animation. Many people I have read reviewing the early Mickeys complain about the musical interludes. I see now what they are saying. Nearly this entire short consists of a song, followed by a brief interlude, then another song. It’s rather mind numbing if you watch it multiple times, as I tend to do when doing these posts. 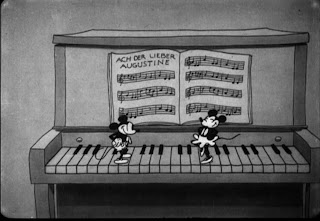 The “story” such as it is involves a cat leaving his house behind, with Mickey and his mice pals, including Minnie, taking the opportunity to party. That’s it. I think that’s really where the problem lies. In the Oswalds, Walt and his team created a real sense of story in each short. There was conflict, and you rooted for Oswald to overcome the odds and succeed.

In this short, though, there is nothing of that kind. The simple addition of the cat coming back would work wonders with the story, but that’s seemingly not the point. Instead, the idea is simply to revel in the musical party that Mickey and friends are throwing. It’s fine if you haven’t seen something like it before. 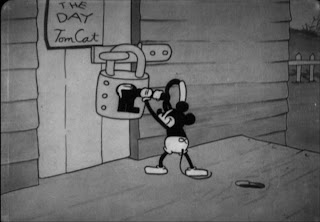 The problem is, I have seen it before. Both Alice the Piper and Alice Rattled By Rats feature similar ideas with rats taking over a house. In fact, the rat sequences in those films are very much the same as this, with the rats dancing and playing to music. There’s even a similar “rats turning themselves into a record player” sequence in this short like in the previous ones. 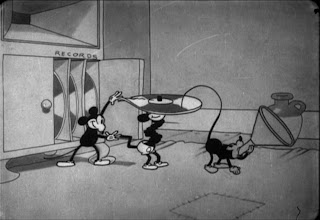 This is just not an original short, and that’s where I feel let down. Again, it was the standards of the Oswald shorts that raised my expectations. The phenomenal work done on Plane Crazy, The Gallopin’ Gaucho and Steamboat Willie kept expectations high.

Not to say that there are not some good points in this short. There are some neat gags, like Mickey turning one of his rat friends into a key to open the lock to the door, or the way his tail comes around to pick him up when he’s about to fall on a mouse trap. Unfortunately, moments like these are few and far between. 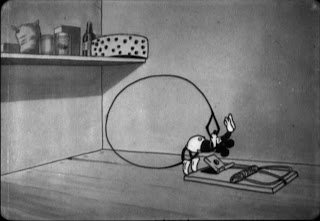 Instead, most of the short is spent with Mickey and Minnie dancing on top of a piano. The score of the short is outlined from the piano, and the rats dance to that. There is one cute bit about the score, as the rats march in whistling the same tune that the cat is whistling as he marches away from the house. It is a nice touch. 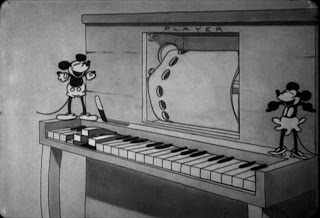 Overall, though, I have to say that I hope When The Cat’s Away is a brief departure for the Disney animators, but from what I’ve read, I fear that it’s the beginning of a long stretch of these musical cartoons. If that’s the case, just bear with me, because more reviews will be like this.
All images copyright Disney. All rights reserved.
Posted by Ryan at 9:47 PM