The quality of the Alice shorts hits a new high, in my opinion, with Alice the Jail Bird. It’s not so much that the quality of the animation is so overwhelmingly great, or that the story is exceedingly original, but the gags are fast and furious here, and they make inventive use of the medium.

The story is actually quite simple. Alice and Julius are riding along on the back of a turtle (???), when they see a pie laid out in the top floor window of a nearby building. Julius speeds up the turtle by getting off to push, then gets to the top floor by standing on the turtle’s head while Alice cranks his tail to extend the turtle’s neck. 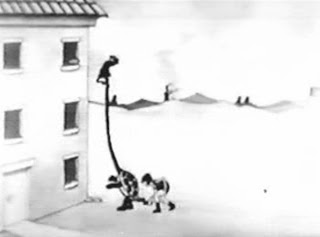 That’s just the beginning of the great gags. When the hippo who baked the pie sees the gang stealing it, she yells “Help! Polize!” and the police officer forms out of the incorrectly spelled “Polize.” He begins chasing Alice, Julius and the turtle, with Julius still seated atop the extended neck, and Alice opens the turtle’s shell to hide inside.

What follows is a cavalcade of gags during an elaborate chase sequence. The officer shoots at the gang, separating the turtle’s neck from it’s head where Julius is perched, so Julius reaches down with his tail and yanks more neck out from the turtle’s shell. Julius grabs one of the smoke rings from the gunshot and throws it back at the cop, who then proceeds to use his gun and the smoke ring as a unicycle to catch up more quickly. Julius turns the turtle into a boat, turning it over on its back and pulling off its arms to use as oars. The cop follows to land where Julius and the gang run into a tree with a hole in it, then pull the bark down like a window shade. 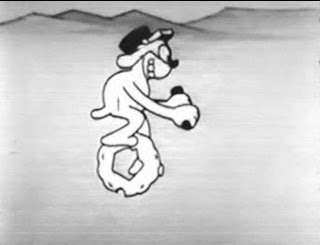 It gets hard to catch all the gags, as they come fast and furious during the chase sequence, barely giving the viewer a chance to breathe. This is similar to what I saw in the Ub Iwerks documentary, The Hand Behind the Mouse, of how Ub would pack his later cartoons with such rapid fire gags. You have to figure that Ub played a heavy part in this short. 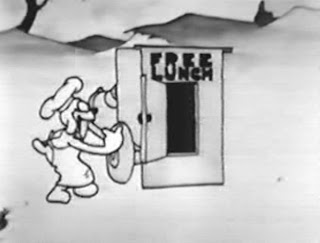 The cop eventually catches the gang, by posing as a free lunch wagon, and drives them off to jail. Even there, there are more great gags. Julius and Alice are breaking rocks and a supervisor comes over to yell at them for moving slowly. While he yells at Alice, Julius notices that he’s pounding a nearby stump with his hand, so Julius places the rocks there and lets the yeller pound them. The turtle breaks a rock and reveals a pool ball, so he pulls off his tail and begins playing pool. 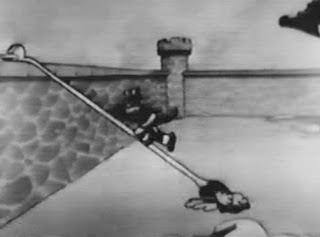 The inevitable escape comes when Julius uses his tail as a crane to lift his prison ball, then convinces an ostrich to peck off the chain and extend its neck so he can get over the wall.

After that, Julius again grabs a smoke ring from one of the guards’ gunshots, and uses it to float down the wall. But a cactus at the bottom convinces him to start flapping his arms to get back up. So, Julius begins flying, and picks up Alice to fly away as the short ends. 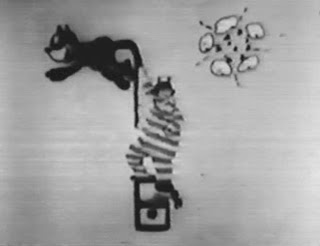 In all the shorts so far, there has not been one as packed with gags as this one. Every few seconds, there is another inventive gag, using words as a prop, or making use of effects like smoke rings or other crazy options. This has to be the funniest of the Alice Comedies yet, so we’ll see if the quality continues.
Posted by Ryan at 4:31 PM