Today’s short puts to rest a long running myth among Disney fan communities. We’ve always heard from grumpy Disney fans that “Walt didn’t like sequels,” or that “Disney didn’t used to do sequels.” I’ve long believed and stated that this was untrue. Sure enough, today we get The Big Bad Wolf, a sequel to The Three Little Pigs. And guess what? It’s fantastic.

Call it the Godfather Two of shorts, or the Toy Story 2 of animated shorts. But The Big Bad Wolf lives up to its predecessor in every way. The storytelling is superb, the animation is fluid, crisp and dynamic and the music returns from the original to provide a great overall package. 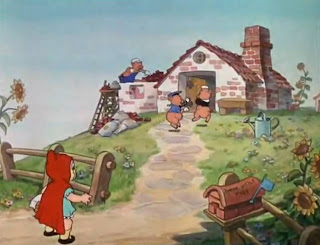 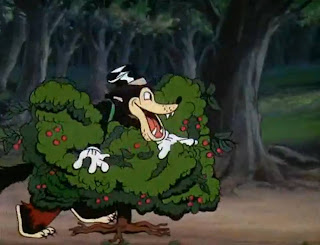 Red runs into the pigs early on, and the pig with the brick house warns her not to take the shortcut through the woods to Grandma’s house. Despite their earlier experiences, the other two pigs laugh at the possibility of the Big Bad Wolf getting Red, and agree to go with her on the shortcut. When will they ever learn?

Of course, the wolf shows up, and chases them off. There’s a funny bit where he pretends to be a fairy, but is soon revealed, leading the pigs to run back to the brick house while Red tries to make it to Grandma’s. 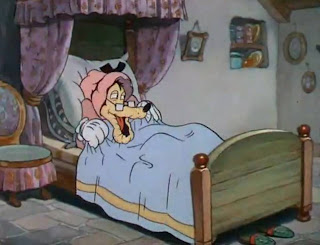 We all know the story, of course. The wolf makes it to Grandma’s first and dresses up as the old woman, to surprise Red. The pigs, though, make it back to the brick house before damage can be done. Taking the role of the woodsman from the original story, the brick house pig grabs his toolkit for exterminating wolves and heads for Grandma’s house. 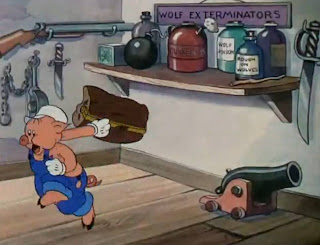 The best gag in the whole short to me is how the wolf gets defeated. We get set up with ghastly expectations, seeing the array of weapons the pig has to beat the wolf. There are knives, cleavers and more. Instead of using those, the pig dumps unpopped popcorn in the wolf’s pants, then tosses in some hot coals. The result is a wolf running off into the sunset with popcorn flying out of his backside. 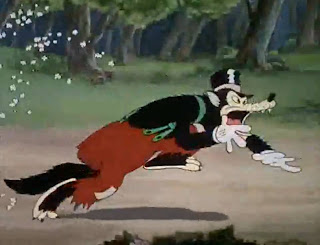 This short does not let up. Although it’s not as gag packed as some of the Mickeys, the action continues at a rapid pace from the opening sequence. There is some disconnect at the two pigs ignoring the danger of the wolf, but it’s quickly forgotten. Just like before, the wolf design is spectacular.