Camping Out is a nonstop gag fest with Mickey and the gang, and as such, is probably the funniest Mickey short in quite a while. It’s also one of the few that features Mickey and Minnie hanging out with Horace and Clarabelle. But the stars of this short are the mosquitoes.

Things start out innocently enough, with the four friends enjoying a camp out. Clarabelle is baking, Minnie is tending the camp, Mickey is playing harmonica and Horace is relaxing. It’s very interesting that this is one of the few times these four are together. We’ve seen it a couple times before, but as Horace and Clarabelle begin to fade into oblivion, it’s nice to see them in this short. 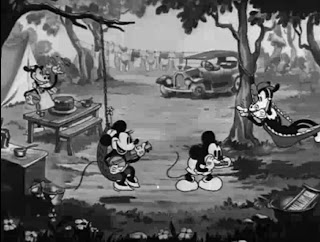 A mosquito starts messing with Mickey, and Horace and Mickey swat it away, bending its stinger. When the mosquito reports back to its parents, then war is declared on Mickey and the gang, and the fun truly begins. 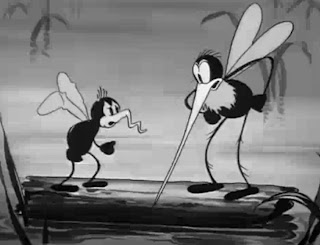 From the moment the mosquitoes appear on screen, the gags come a mile a minute. They are fun gags, with the mosquitoes attacking, and the gang trying to repel them. The action starts out in the camp, with the group using their picnic food to attack. Mickey loads up a can of peas and fires them at the mosquitoes, impaling the peas on their stingers and weighing them down. Horace fires molasses at the mosquitoes, sticking them to a tree, and then to himself. 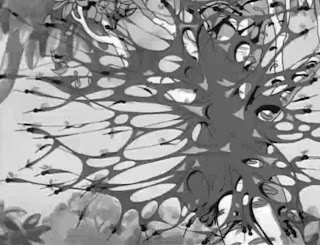 That’s just a couple of examples. The work on the gags in this short is the best of the Mickey shorts in quite some time. There are so many that it’s impossible to list them. One of my favorites is seeing the mosquitoes lift Horace off the ground when he opens an umbrella to shield himself from the onslaught. Even with Mickey hanging on, the mosquitoes still get him up. 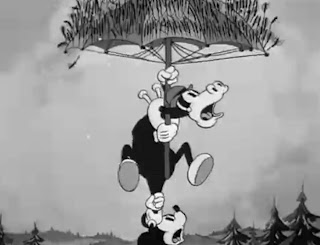 It’s Mickey who provides the final solution for the mosquitoes. He funnels a pipe from the tent into a pair of Minnie’s bloomers, trapping the bugs inside as they enter. This provides Horace the opportunity to kick the mosquitoes in the rear end as they leave. 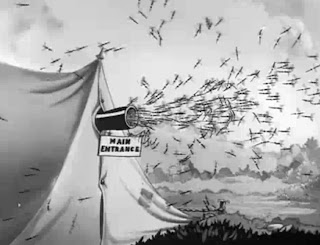 It’s noteworthy how much of this short revolves around Horace’s actions. It’s easily the most work he has done in these early shorts. His gags are the funniest, and his actions are a driving force throughout. Certainly the best short for Horace fans.