Once again today we have a short that could be considered a sequel. This time, Mickey gets in on the act, with Gulliver Mickey, a direct descendent of Giantland. Just like before, the short features Mickey telling his nephews a story, involving himself as the main character of a popular story. Before it was Jack and the Beanstalk, and here, it’s Gulliver’s Travels. 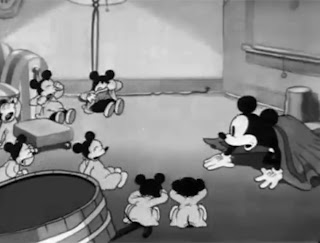 I have not read Gulliver’s Travels in quite some time, so forgive me for not being overly familiar with it, but this seems like a faithful adaptation up to a point. Mickey is shipwrecked (seems to happen to him a lot) and is washed ashore and falls asleep on the beach. When he awakes, he is tied down by the little people of Lilliput (although they are not identified as such in the short). 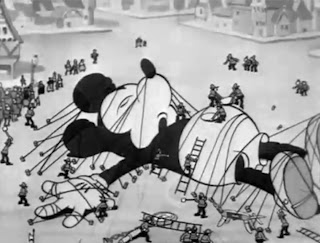 From there, we get some nice scenes of Mickey interacting with the Lilliputians. I have to say, though, that these scenes are lacking in something. I can’t quite put my finger on it, but it’s possible that it’s just the harmlessness of the interactions that is bothering me. Mickey goes through the whole thing with a smile, chuckling at the little people’s attempts to destroy him. 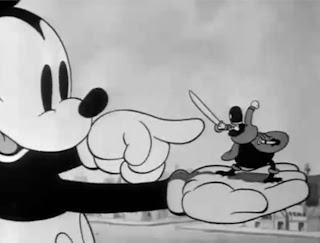 It’s rather disconcerting, seeing giant Mickey smiling away as the little people shoot him with cannons, poke him with swords and drive their ships into his backside. It is supposed to be humorous, seeing the futility of these small people, but it really comes off as cruel to me. I think there is a failure of the animators to make this section worthwhile. It goes on for a while, and there’s really no muscle to it. 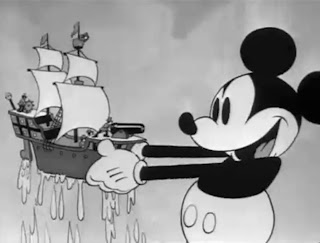 Things change at the end, as a giant spider, with Pete’s face, shows up, to battle Mickey and terrorize the town. This battle is the main conflict of the short, which makes the ending so much worse. Instead of Mickey defeating the spider and earning the trust of the townspeople, we simply fade back to the living room, where Mickey’s acting out the battle with a pillow. 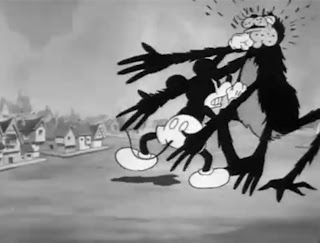 Sure, this leads to a great gag with one of Mickey’s nephews scaring him with a plastic spider, but it leaves the Gulliver story unresolved. Simply having the townspeople celebrate him and thank him for beating the spider would have made the middle section better, and enhanced the ending of the short.

I have to say that this is the first Mickey short where I thought that the later criticism that Mickey is not a starring character was valid. This is a short that could have been much funnier with Donald or Goofy in the lead role. Mickey was a vehicle for a story that could have been told with anyone. Roles like this are likely what lead to him being phased out of the lead roles and the supporting cast taking on more of the burden in his shorts.