Peculiar Penguins is a fairly straightforward story, and it’s a Silly Symphony that manages to push some borders and use great characters to tell an entertaining story. It’s a love story at heart, and there’s a lot of heart warming stuff to enjoy in this short. 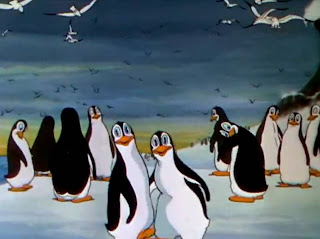 That’s probably odd to say when talking about a short that is set at the North Pole. But, Peculiar Penguins quickly goes from a general look at penguins to a focus on two penguins in particular, as a male penguin tries to impress his female friend. His first gesture is to take an icicle and top it with snow, making an ersatz ice cream cone. I found that pretty funny, considering that they are in the coldest place on Earth.

That trick works, but then our male penguin gets a little ambitious, and decides to go diving for fish to present to his lady friend. Here’s where I think the animation is particularly good. When you see the penguin under the water, chasing the fish, it’s clear that it is underwater, but you see the fluidity of motion and the natural effects of swimming so clearly. It’s probably the best underwater scenes Disney has done yet. 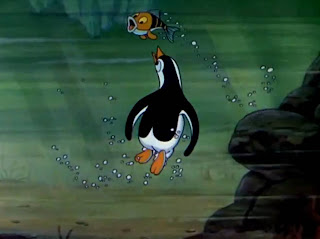 He runs into a problem, though, as the fish he gets for the female penguin is a blowfish, and after she swallows it, the fish continues to blow up, inflating her with him. After getting the fish out, the female is angry. She slaps the male around and dives away. 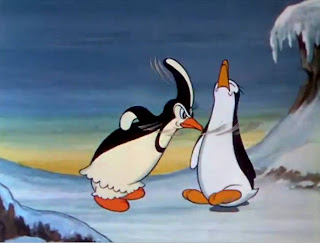 One thing I’ll say is that the animation is especially good here as well. Putting expressive faces on these penguins could not have been an easy thing to do. But the female is able to express disappointment, anger and indifference over just a few seconds. That’s quite a feat for a series of drawings.

Anyway, as the female swims away, a shark comes to menace her. Seeing the opportunity, the male jumps in to save her. His battle with the shark is the best sequence of the short. There is some great animation work here as well. We get to see the penguin and shark swimming towards and away from the camera in quick, bold strokes, and we also get great gags like the penguin propping the shark’s mouth open with a stick. 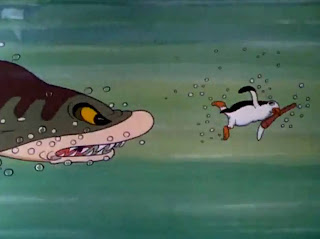 Finally, of course, the shark is defeated, and the penguins reconcile. That sets up the final scene, which is a great shot of the penguins meshed together, forming a heart, as the Northern Lights cascade around them. The shot is held for quite some time, and it provides a beautiful ending to this short. 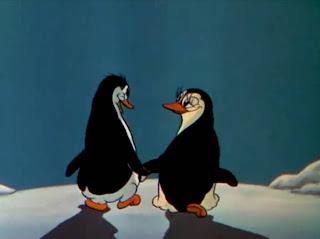 This short is quite an improvement over the last penguin short, Arctic Antics. The animation quality is amazing in this one, and the use of color really brings out the differences between the penguins, and helps with the emotional storytelling. I liked this one quite a bit, and recommend it highly.